Japanese ramen-maker Nissin has found itself in hot water over its new advertisement featuring the US Open champion Naomi Osaka.

Critics say the character in the anime commercial looks nothing like the half-Japanese, half-Haitian tennis star and have accused Nissin and the commercial's designer - veteran manga artist Takeshi Konomi - of whitewashing the tennis star.

Osaka, who appears next to Japanese tennis player Kei Nishikori in the cup noodle ad, is depicted with curly brown hair, pale skin and European features.

"Shame on you Nissin for whitewashing Naomi! She is beautiful and perfect as she is," wrote Twitter user Clare Yoshida, about the video, released on January 3.

Others called out the anime artist Konomi, whose ultra-popular manga series "The Prince of Tennis" has also featured characters of African descent.

"Why, does [anyone] change the skin colour to something that deviates from the real person so much?" asked another Twitter user. "Why did you draw like this? It feels out of place, I want to know what happened, the whole story."

Nissin, one of Osaka's main sponsors, has supported the athlete for years. It signed her in 2016, two years before her US Open victory and at the time many applauded the decision as a move towards boosting diversity.

In light of the advert, many are reconsidering how progressive the ramen giant truly is.

"I don't think they meant to be offensive but in all honesty they could do better," said Katie Sachiko Scott, who self-identifies as "Blackanese" - half-Japanese, half-black - and has lived in Japan for 14 years.

"They know it. we know it. It's not something that you can hide," she said, adding that mixed race Japanese were often held to higher standards.

"Only when we are great are we acknowledged and recognised for being Japanese," she said.

Osaka has long been at the centre of a public discussion regarding her background. Last year, when the 21-year-old became the first Japanese woman to win the women's singles title at the US Open, her victory over 23-time Grand Slam winner Serena Williams was widely commented on. Critics around the world questioned whether Osaka, who was born in Japan and raised in the US, was "Japanese enough" to represent the country.

Critics said the Nissin video showed how little had changed in Japan's attitude to diversity. The nation is largely racially homogenous.

Baye McNeil, an African-American columnist for the Japan Times who writes about multiculturalism, said Osaka was seen as a tennis champion, and her win had become associated with Japan, but like most ha-fu, or half-Japanese people, she was still not fully accepted.

"Many Japanese still believe deeply in the notion of the [pure] Japanese race," said McNeil, "And so, she'll never truly be Japanese."

He said there were aspects of Osaka that would be accepted as Japanese - she has often been described as "shy", "humble" and "apologetic", for instance.

"[Before she won the US Open,] there was the image of the strong black female tennis players like Venus and Serena Williams, so maybe the Japanese expected Naomi to be similar," he said. "She did not behave as expected, and I'm sure many Japanese attributed this to her 'Japanese side'." 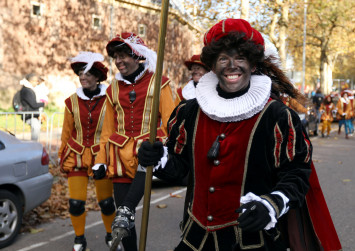 He said the whitewashing of Osaka was a conscious effort by Nissin to shift the public image of Osaka from being an "undesirable" dark-skinned foreigner to being perceived as a "desirable", light-skinned member of society.

While Osaka herself is yet to comment on Nissin's ad, she has said she prefers to refer to herself as Haitian-Japanese.

"Everyone wants to claim her. The Japanese, the Haitians as well," said McNeil. "But she has made it clear that she is Naomi. Greater than the sum of her parts, and embracing all aspects of herself."