One or more kids? 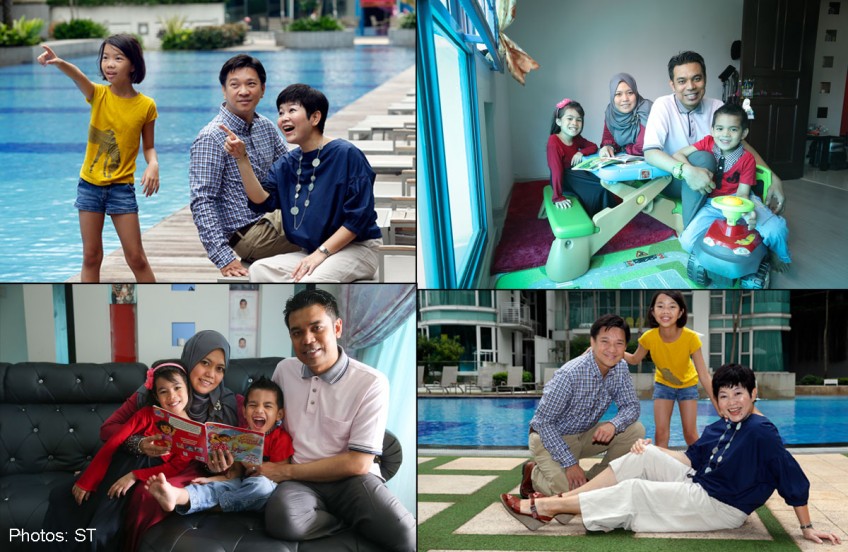 Planning the size of one's family is a tricky business. Whether left to biological chance or the calculus of contraception, parents can feel they have limited amounts of energy, expenditure and other resources to divide among their offspring.

According to the Department of Statistics' most recent population report in 2013, families with one child are an increasing trend. But two children continue to be the norm.

The parents profiled here chose the size of their families and tell the reasons, outlining the internal and external factors that drove their choices.

However, some parents with larger families offer a different perspective: It is okay to chill, sometimes.

She says: "To have three or more, you need to be relaxed, you need to not be so kancheong (Hokkien for anxious) and worried about their food, milk, diapers and university. If it's a planned pregnancy, you should expect it. If it's unplanned and you're caught by surprise, just take it easy. Each kid brings a different kind of blessing."

Yet she does not downplay the energy needed to care for children, adding: "There will definitely be a difference in terms of expenses and time management, having one or many, for instance."

However, some parents say, caring for three is similar to caring for five. "Three children are already a handful, five is not so much of a difference in terms of the routine care needed, for example, when it comes to cooking. When you cook for five, you will cook slightly more," says Ms Norlinda.

But she adds: "You really must be fair and have time for each of your children."

Ms Hew Boon Bee, 42, an assistant vice-president at a Japanese bank, and Mr Ricky Chue, 46, a ship broker, have one child: Bernice, eight.

Ms Hew: "It's not easy to raise a child in Singapore, financially and in a competitive environment in school and society. If we had a lot of children, we wouldn't be able to give a lot of attention to all of them.

We want to give Bernice our full attention. If we had two kids, it would be 50 per cent each. For example, I speak Japanese and am teaching her Japanese as well. With one child, I can do it. If I have another child, I don't think I can devote my time after work that way.

Singapore is a very stressful environment, especially for a working woman. When you come home, you want peace of mind. I can imagine feeling stressed if I come home from work to a lot of housework and if I have many children wanting my attention. We have no helper.

My girl is eight years old and I'm at a relaxing stage of parenting. I don't worry about her being lonely because in school, she has her friends, and when she comes home, we are there.

She likes to play with her My Little Pony toys. Sometimes she will say, 'Can you give me a sister to play with?'

I would tell her, 'You don't have a sibling because I want to give you full attention. For example, I don't think I can buy so many toys for you. You would have to share with meimei or didi (Chinese for little sister or little brother).'

My husband and I are not young anymore, why should we go for another one?

If I had another child, how many years would I have to wait for the baby to grow up before I can lead my own life - at 60 or 70?"

Ms Mariam: "When we had our first one, we weren't thinking particularly of a second one.

But when we got a boy, we said we could stop at two, since we have one girl and one boy. That's enough for us.

Expenses nowadays are very high. When I had our second child, only two years after the first, we noticed an increase in the price of formula milk. We were thinking, if we had a third child, would there be another increase?

With two kids, my husband will usually take care of one and I will take care of the other. Sometimes, they both want only mummy. If we had another child, I don't think we could handle it. We have no maid and as a working mum, time management is important to me.

Sometimes, both of them want my attention. We'll talk together - I will be in the middle, with one child on the right and the other on the left.

When I fetch them from the childcare centre and we walk home together, I will ask each of them, 'How's your day? What did auntie cook for you today?'

Both of them want to tell me their story at the same time and they play 'scissors, paper, stone' to see who gets to tell me first.

Both of them are growing up together now. If we have a third, we'll be starting from scratch."

Mr Lim: "I think it's the perfect size for a family. Four children would be too much to handle. If it were just one child, he or she would be too lonely. If there were two kids, at least they would have each other, but that's too few people in the family.

Hearing three people talk is more interesting than just two people. There's a lot of dynamics there. Two can agree to disagree with one person.

This is enhanced by my three children being close in age, just two years apart between each child.

They are quite communicative. Sometimes they are very close to one another; other times, they keep tabs on one another.

The youngest, who is the most active, will sometimes keep track of the older two, catching them out in terms of whether they are supposed to be studying or doing homework, for instance.

We don't experience anything like the middle- child syndrome, where middle children can sometimes feel left out or marginalised.

All three are treated quite fairly. We don't really focus on just any one of them.

In my opinion, it's a big jump from one to two kids. With one child, the couple can take turns to look after her, with one parent just doing their own thing. With two children, the parents have to attend to both, especially if they are close in age.

When you are used to two kids, three is nothing because you're well trained in multi-tasking."

The rest of them help take care of him. He's the focal point, which also results in the three older children talking a little bit more with one another.

They're a lot more understanding of his behaviour because of the age gap between him and the rest.

We wanted to expand the family because both of us love kids. I also decided that we wanted my wife to have a 'good pregnancy'.

When we had the first three kids, I was really busy working, running my own business. The fourth one was different - I spent quite a bit of time with my wife during the pregnancy and, during her confinement period, I took a month off.

By the time Leroy arrived, we had learnt to be better parents. Over the years, we learnt that maybe being less strict allows children to determine their own personality more.

Leroy likes drawing and running around like crazy. Last time, once it got a bit noisy, we would tell the kids straightaway to pipe down.

Now we stretch it out for Leroy, letting him have fun until we cannot tahan (Malay for cannot tolerate) when it gets too noisy.

We lead a simple life. Kopitiam can already, no need to go to restaurants. Buses and trains are fine and we hardly took cabs before I bought a car.

About five years ago, around the time Leroy was born, I bought one as it was hard to fit all of us in a taxi. But we rarely all go out at the same time anyway as the teenagers often have their own schedules."