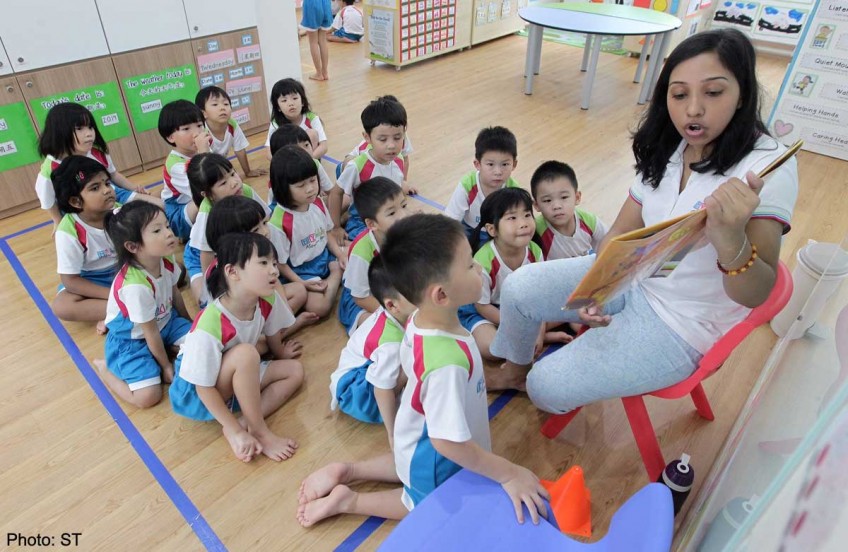 With childcare centres of the future set to take in as many as 300 to 500 children, that question is on some parents' minds.

While some laud the move to ease demand for childcare at areas concentrated with young families, others are concerned about whether the standard of care can be maintained.

On March 13, Minister for Social and Family Development Chan Chun Sing mentioned during the ministry's debate in Parliament that the Government is helping anchor operators develop bigger childcare centres and provide an additional 2,400 new places over the next few years.

Usually, a centre in a HDB void deck can take in about 100 children.

A father of three, Mr Kong Yew Kiin, 36, said the bigger centres "allow more parents who are both working to have a solution to take care of their kids".

But it should extend beyond primary caregiving since children are in childcare most of the time, said the business owner, who has two-year-old twin sons and a son, aged four.

Madam Chan, a teacher who has two daughters, aged two and four, is concerned about the quality of care and whether standards can be maintained.

She said: "The centre will need strong leadership to ensure that it can be well run."

Said the housewife: "There's a risk of 'expanded ratio', especially if a teacher is on leave or resigns and (the school) cannot get a replacement.

"This will reduce the amount of attention given to each child."

And when seasonal illnesses like influenza hit, there's a higher likelihood of children catching the virus, "as the centres will be more crowded and it will be difficult to isolate the sick children", she said.

Smaller childcare centre operators said size does not matter, as long as the ratio of teachers to students is kept low.

What matters is the management standards of the heads as there will be challenges, said the principal of Bright Kids School House in Punggol, who wanted to be known as Ms Tang, 30.

She said: "There are not just children but parents and employees to handle as well."

But bigger centres may slowly edge out the smaller ones, as the smaller operators may not be able to compete.

Madam Lena Ng, who is in her 40s, principal of Genius School House in Punggol, said the bigger operators have the financial muscle to afford newer and better facilities such as air- conditioning, which some feel provides a more conducive environment for children to play and learn in.

She said: "Parents are going for affordable centres. My centre is 10 years old and it is hard to compete. When parents come in, the first impression lasts.

"I have to think of how to renovate my centre. Then there's rental to pay and teachers' salaries are going up."

Despite that, she receives at least two inquiries about vacancies daily from parents and she has had to turn them down as her centre is full at the moment.

"There's a long waiting list, about 100 in total for all the age groups," she said.

One of the anchor operators, PAP Community Foundation (PCF), said the jumbo centres are likely to be standalone large sites.

With larger spaces, PCF will have the opportunity to vary the curriculum and design a more varied and innovative programme, such as to include more science and other project- based activities, said its spokesman.

She also said quality can be maintained as PCF will establish "effective human resource and operating practices which commensurate with the scale of the centres".

PCF's largest childcare centre is in Nee Soon South, which can accommodate 248 children.

"We are able to operate this centre without concerns raised," the spokesman said.

But from a child's development point of view, a bigger centre is not better, said Dr Lily Wong, 70, a teacher-educator and educational psychologist.

The executive director of Advent Links-SAUC, a centre that specialises in training early childhood teachers, said: "Preschool children are not socially-inclined. They will feel lost. The attachment is very important. The communication has to be one-to-one.

"When the centre gets very big, it has to be very community-based. The basic care is taken care of, but the children's socio-emotional development will be neglected."

ECDA: Quality of care will be maintained

When told about parents' concerns, the Early Childhood Development Agency (ECDA) said the quality of care and education received by children will not be compromised.

Its spokesman told the New paper: "these larger childcare centres will be subjected to the same regulatory requirements that eCDA has for smaller centres.

"These include staff-child ratios, space requirements for each child, and having contingency plans in place."

He also said that by sharing manpower and resources, the larger centres can operate efficiently.

He said: "for example, a large centre can have one supervisor, instead of several, that would be needed to oversee a few smaller centres.

"Teachers trained in specialised skills such as mother tongue language teaching can also serve more children. teaching and learning resources, as well as other facilities, can also be shared."

More details on these large centres will be released later this year, he added.

He said: "first, there will be some economies of scale as we can have more shared facilities.

Otherwise, each small childcare centre would have its own individual facility and this may not be an efficient use of resources.

"For example, we can have a pool of teachers or teacher aides on standby to cover situations when teachers fall ill or have to take urgent leave, or when they have to attend upgrading or training sessions.'

He also said that other resources such as a school administrator to deal with school fees and administrative issues, as well as office supplies like fax machines and photocopiers, can be shared.

But he stressed the need to ensure that the ratio of teachers to students is adequate so children are properly supervised.

Mr Baey Yam Keng, another Mp who sits in the GpC for education, said bigger centres offer better career prospects and progression for teachers, which in turn will aid in staff retention.

the teachers' responsibilities remain about the same, except that there will be more teachers to provide the same level of care, he said.

And with the critical mass of children and teachers, there is better synergy in organising celebrations such as National Day, he added.

he foresees that other concerns like traffic congestion and noise level can be resolved with the choice of location.

He said: "instead of void decks, it will be in a stand-alone building with classrooms. i imagine it to be an old school building where you will have parking as well. it will be self-contained within a compound."

This article was first published on March 23, 2015.
Get The New Paper for more stories.