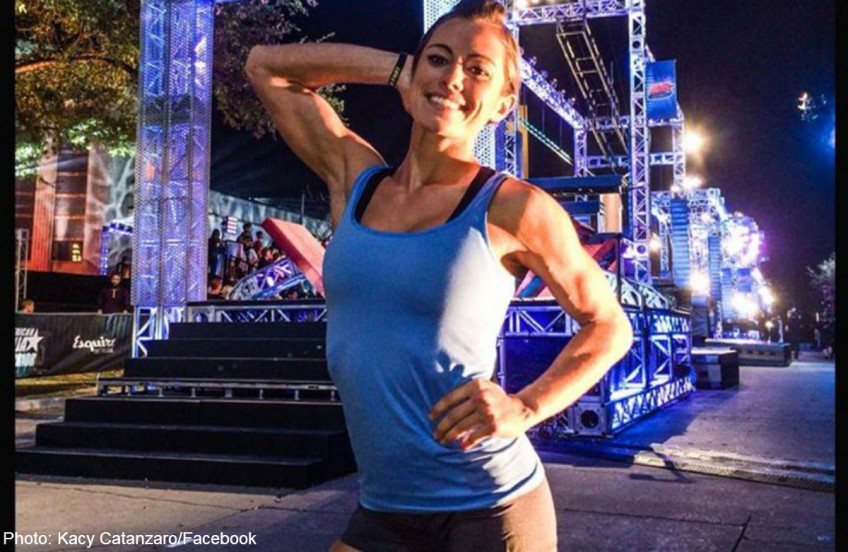 Size is no obstacle: Kacy Catanzaro at the American Ninja Warrior contest.

She has accomplished what many Navy Seals, Crossfit athletes and other fitness buffs have tried but failed to do: Complete the America Ninja Warrior obstacle course and qualify for the finals.

She secured a spot in the finals in Las Vegas, where she will compete for the US$500,000 (S$621,000) prize money and the chance to clinch the title of American Ninja Warrior.

Having been watched by millions on the broadcast of the show and online, the 24-year-old, who is from Belleville, New Jersey, said she has been blown away by the response to her feat.

"I knew a lot of women would be excited and inspired by it," Ms Catanzaro told USA Today.

She was a huge fan of the Japanese show Sasuke, which inspired the American version, while she was in university.

She then started training with boyfriend Brent Steffensen - who also competes on the show - last year.

Ms Catanzaro made it to the qualifying round last year, but did not finish the course, but has come back this year very strong and made history, Epoch Times reported.

One of the secrets to her phenomenal athleticism is a diet heavy in seafood, which allows her to be light and lean yet strong.

In addition, she shuns processed foods, grains and gluten, instead going for "super natural things" such as greens, fruits and nuts.

She told entertainment news portal Popsugar: "Our workouts are all bodyweight workouts. We do lots of different kinds of pull-ups... Which really get your back strong.

"We also do a lot of handstand push-ups, which are really good for the upper body."

Ms Catanzaro also spoke of the importance of self-belief during training and competition.

She told USA Today: "I do talk to myself a lot and say, 'You can do this, you can do this', and I give myself certain tips if it's an obstacle I'm familiar with."

So what is next for her?

"Obstacles are definitely my passion right now," she said. "So I'll be a Ninja Warrior for as long as they'll have me."