Photo shoots on vacant state sites at no cost 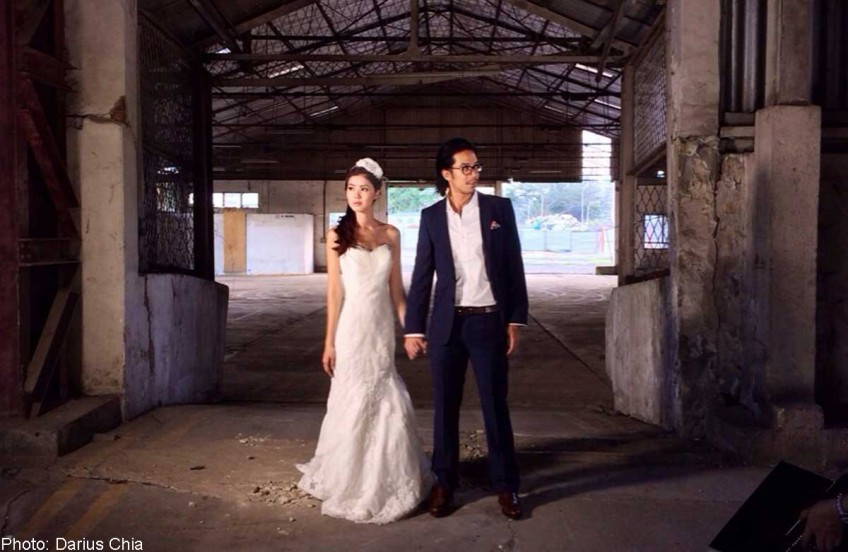 Engaged couple Darius Chia, 32, and Annabel Tan, 29, gained free access in May to a state property, the former Kallang Auto Centre, where they took pre-wedding photographs.

Over the last year, the Singapore Land Authority (SLA) has quietly allowed people to make use of vacant state properties without charging them a cent.

So far, eight individuals or groups have enjoyed a waiver of the temporary occupation licence fees needed for short-term use of such premises.

The condition is that users are not allowed to erect any structures on the grounds, stay longer than two hours or use them for any commercial purposes.

The SLA said the move is part of efforts to make better use of vacant properties, and foster a stronger community spirit.

Mr Lee Seng Lai, SLA's director of land operations, noted that many of the properties - such as the Tanjong Pagar railway station - are rich in history.

Allowing free use of the state properties for short, non-commercial visits lets more people enjoy the buildings' charm, he said.

The licence fees for properties vary depending on location and purpose. For instance, visiting a space for social use, which includes gatherings for interest groups to take photographs, costs about S$120 a day.

SLA is in charge of about 5,000 properties, and its annual report last year said at least 50 state properties were not utilised or rented out.

Mr Francis Lim, an insurance claims investigator and an alumnus of the now defunct Silat Primary School, was part of the group granted the first fee waiver last May.

He and his five siblings had all attended the mixed school in Jalan Bukit Merah, which was near his home. The school closed down in 1991 reportedly to make way for redevelopment, but many of the buildings on the premises are still standing today.

Mr Lim, 40, said some of his best childhood memories were of his school days, from catching guppies with his tumbler in the drain to helping build an eco-pond. The same goes for many others in the alumni group.

Close to 100 members of the 467-strong Silat Primary alumni group on Facebook turned up at the school on Vesak Day last year to explore the grounds, talk about the past, and even play Zero Point, a jumping game.

"We come from all walks of life and different generations. But just being in the school together enabled us to share a common bond. It was a great experience," said Mr Lim.

Engaged couple Darius Chia, 32, and Annabel Tan, 29, also gained free access to a state property in May when they took pre-wedding photos at the former Kallang Auto Centre.

"We were really keen to capture the old with something 'new', and were initially told it would be costly to rent. But SLA was very accommodating once we explained our purpose," said Mr Chia, a property agent.

Sociologist Paulin Straughan lauded SLA's move. "We've always been talking about moving forward with social integration, but one important challenge many civil society groups face is the lack of a suitable meeting place," she said. "Now it looks like such groups might be able to tap on suitable infrastructure."