This pilot was once known as Miss Thailand 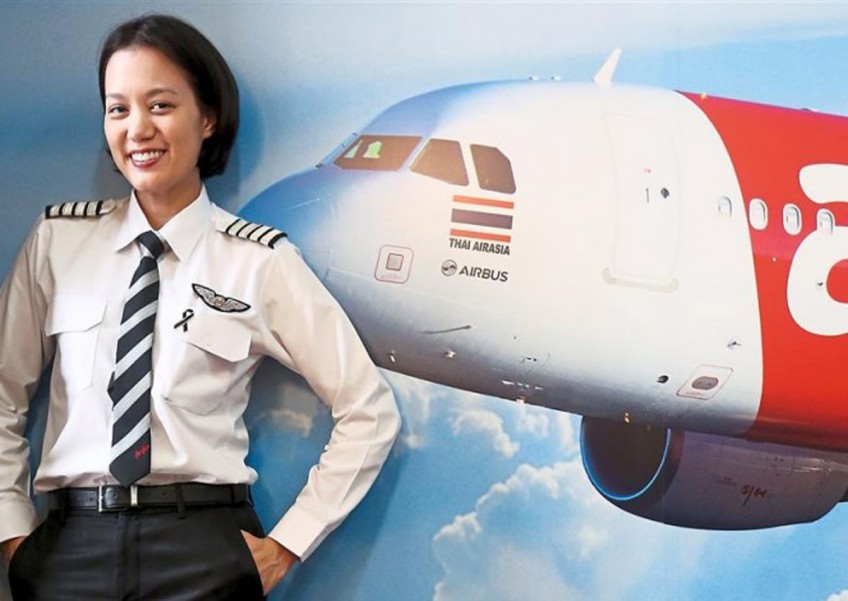 Thai AirAsia’s Captain Chananporn Rosja is living her dream of being a pilot.
The Star/Asia News Network

There are 10 women captains flying AirAsia's fleet in Thailand, and Captain Chananporn Rosja must be the most famous of them all.

She is also the fairest; after all she has the Miss Thailand/Universe 2005 crown to rule them all.

Her story is well known not only in Thailand but also in the region for she has been written about quite a bit.

The buzz around Chananporn has quietened quite a bit and most people would probably not recognise the beauty queen pilot in her uniform.

But even without makeup and in her uniform of white shirt, black pants, black necktie and patent leather brogues, she cuts a striking figure as she walks across the arrival hall at the Don Mueang airport in Bangkok.

The shy pilot still blushes upon receiving compliments about her good looks.

"I'm really your average girl from Thailand. In all honesty, I don't know how to put on make-up and I'm really the sort who prefers jeans and t-shirts over dresses and skirts. In school, I was into athletics and played games such as volleyball, basketball and wakeboarding. Between gowns and jeans, I'd chose jeans," says the friendly pilot, who comes across more as the girl next door rather than a glamorous beauty queen.

But then again, the beauty queen's crown was not 35-year-old Chananporn's most coveted prize.

It was always the pilot's cap that she had her eyes on.

"Aviation is in my blood. My mother was a Thai Airways stewardess in the 1970s. From young, I got to meet many pilots and had numerous opportunities to sit in the cockpit," shares Chananporn who attended secondary school in New York as her aunt (who is her guardian) was with the Royal Thai Consulate General there.

Chananporn, who still retains her New Yorker's accent, also speaks Italian and German, apart from English and Thai. She returned to Thailand in 2000 and did her degree in electrical engineering at Thammasat University in Bangkok.

After her graduation in 2004, Chananporn found herself at a crossroads.

She wanted to either do her Masters' degree in electrical engineering or enroll in a pilot's course.

But the fresh graduate was strapped for cash and needed financial aid to pursue further studies.

Several months later, she also registered for Ms Thailand/Universe 2005 beauty pageant, drawn to its prize of a million Thai baht (S$40,401), a car and sponsorship deals.

As luck would have it, Chananporn was one of the 40 selected for the trainee pilot programme, out of 3,000 applicants.

But the icing on the cake was qualifying for the beauty pageant too.

"Both offers came as a two-fold blessing. Thankfully, Thai AirAsia and BAC gave me time off from my pilot training to participate in the beauty pageant," Chananporn recounts.

She had no idea what it'd take to win a beauty contest. But her guiding principle in all that she does is to always do her best, and so she went all out to do well in the competition.

Vanity is still not a suit she wears comfortably, and she only dabbed on some powder and applied the barest of makeup for the interview.

Although she had been on the stage of the biggest pageants, Chananporn sought and took instructions from The Star photographer during the photo session.

"Things became even more surreal when I won the coveted titled," recalls the 171cm-tall Bangkok-born Chananporn. It was at this point that her story departs from the well-trodden beauty queen's path to glamour and stardom.

Chananporn declined offers to venture into the entertainment industry or embark on a modelling career after her reign as Miss Thailand.

Instead, she opted to return to the cockpit.

"Being a pilot has been my childhood dream since young. Though the beauty title came with many perks and opportunities, I had my heart on flying high in the sky," says the captain who has flown with AirAsia for 11 years and has clocked 8000 hours in flight time.

According to the International Society of Women Airline Pilots, there are only about 450 female captains worldwide.

While there had been a significant rise of women in other fields such as law, medicine and engineering, female pilots in the aviation industry are still underrepresented.

"Everyone has equal opportunity to succeed. Women working in a male dominated industry should never use their gender as an excuse not to succeed. Aspiring female pilots must have the passion to fly and be aware of the responsibilities and challenges in store," saysChananporn, who celebrates her birthday on March 8, which coincides with International Women's Day.

Though working in a testosterone-dominated field seems intimidating, Chananporn says she is lucky to have supportive male colleagues.

"I respect my job and there's respect for each other. My male colleagues are helpful and understanding. The added bonus are my family, friends and female colleagues who have been supportive of my career choice. I am a former beauty queen but I am viewed as a highly trained professional who takes her job seriously.

"Excel in your studies. Have the right frame of mind and the right attitude. And most importantly, have the passion to soar high in the sky," says Chananporn who flies domestic and regional routes. Her work hours are long but she has no complaints.

"A pilot's job is stimulating, interesting and enables me to meet different people from all walks of life. I have been blessed with the opportunity to live my dream. It clearly proves that everyone can reach for their dreams, if they try hard enough," says Chananporn with a warm smile.

However, sitting in the pilot's seat does come with its fair share of challenges.

There are issues such as manoeuvring the aircraft through turbulence and bad weather, hectic work schedules and difficult passengers.

There are also the long haul flights which take her away from home for days.

There are times when she misses important birthdays and anniversaries as well as time spent with family and close friends.

"These are part and parcel of the job. I feel blessed being able to pursue a career that I love. I love the nature of the job and that's what keep me fuelled with passion," says the lanky pilot who admits she has her share of suitors but has remained single.

"Yes, some of my colleagues who have asked me out on dates. But, I usually turn them down," says Chananporn who likes read books, play the guitar, watch Broadway plays and listen to music.