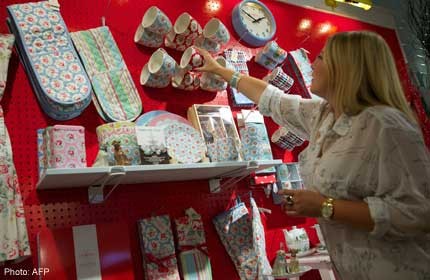 LONDON - The world of Cath Kidston is instantly identifiable - full of bright colours, cheerful prints and nostalgia for an imagined English way of life - and has made the homeware firm one of Britain's global success stories.

A cult following for the vintage- themed bags, clothes and kitchenware, particularly in Asia, helped the firm break through the £100-million (S$198-million) sales barrier this year.

It is a milestone for the brand as it celebrates 20 years since Kidston, an interior designer with family connections to British aristocracy, opened a "glorified junk shop" in West London.

There are now 118 Cath Kidston stores, more than half of them outside Britain. It is a particular hit in Japan, where there are more than 30 stores, while there are a dozen in South Korea.

The company has plans to boost its presence in China and expand into Singapore and Indonesia.

Chief executive Kenny Wilson said: "They love the Britishness of the brand - the quirky, quintessential British nature of us. They love the practical nature of our products.

"And, like customers around the world, they just love the distinctiveness of our print design."

Kidston is a pioneer of vintage style who stocked her first shop with second-hand items that she transformed using updated English heritage designs.

Her first creation was an ironing- board cover in what became a signature rose print, and the 1,000-strong product line now includes everything from tea cups to towels. They are decorated with hand-drawn designs of flowers, spots and strawberries, as well as cowboys, jolly seascapes, London buses and Buckingham Palace guards.

In a book marking the brand's 20th anniversary, Kidston wrote:

"Our signature look is colourful, cheerful, witty, but never too fussy, too pretty or too twee."

The image Cath Kidston projects of Britain, of country- house kitchens and rose-filled gardens, bears no resemblance to most Britons' lives - but that is part of the appeal.

She said she liked the designs: "They're not radical or avant-garde. It's attractive without being glitzy."

The kitsch look is not for everyone, however, and for many, Cath Kidston is the antithesis of cool. Critics say the brand promotes a rose-tinted view of 1950s domesticity that is affordable only to middle-class consumers who have the money to spend £16 on a floral cookie jar.

But the company is thriving in an economic climate that has felled many bigger retailers.

Last year, the British business grew by 21 per cent and its Asian sales grew by almost 53 per cent.

Kidston sold a majority stake in 2003 to allow the company to grow and, now 54, remains as its full-time creative director.

A backpack in the "garden rose" design is one of South Korea's top-selling fashion items after a number of celebrities were spotted wearing it.

The success of the company is reflected in the sheer number of cheap, knock-off Cath Kidston products which fill street stalls - and homes - across Asia.