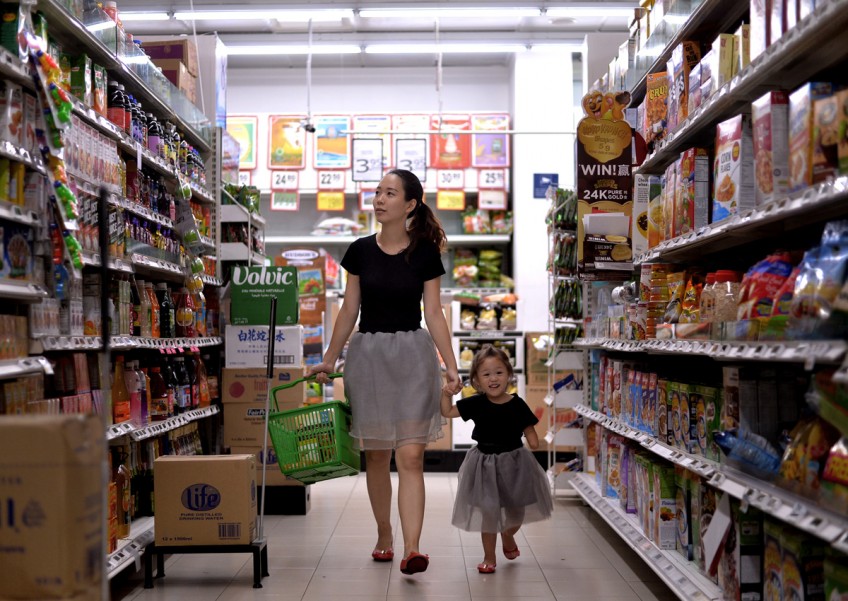 Miss Christabel Koh, who works as a shopper for online grocery concierge Honestbee, takes her daughter along with her to work.
The New Paper

The feeling of holding your baby's tiny hands in yours - it is a bonding moment that an expectant mother looks forward to.

Miss Christabel Koh, 28, was no different. Sadly, she was robbed of that experience.

Her daughter, Chrislyn Rae Koh Lien, was born without her hands properly formed.

Miss Koh, a single mother who works for online grocery concierge Honestbee, tells The New Paper on Sunday: "I had no idea right until she was born. A million thoughts ran through my head. How is she going to survive?"

Her daughter was born in 2013 with amniotic band syndrome (ABS), a rare condition that affects one in about 10,000 babies.

Chrislyn was born without a left hand, and the fingers on her right hand were all fused together.

Now three, Chrislyn had to endure three operations in just 18 months to separate the fingers on her right hand.

She was only six months old when she had her first operation.

The procedures were not easy on a child, and they left Chrislyn weak.

As she struggled to recover, she would throw tantrums, refuse to eat and cry through the night.

Miss Koh quit her job as a sales executive to care for her round the clock. The stress of looking after Chrislyn, paying the medical bills and trying to make ends meet took a toll on Miss Koh.

"There were days where I felt so helpless and alone. I was always asking myself, 'why me?'," says Miss Koh.

She withdrew from her family and friends, only leaving home to buy groceries or for her daughter's fortnightly medical appointments.

The treatment that Chrislyn needed amounted to more than $700 a month, and Miss Koh found it hard to make ends meet.

Attempts to help by her mother and Chrislyn's father were turned down. The pressure was relentless and one day, she snapped.

About a year ago, she climbed to the top of her HDB block and contemplated suicide.

Says Miss Koh: "My mind went to Chrislyn, and in that moment, I realised I was being selfish and weak."

It was a turning point for Miss Koh, and to this day, she hates it that she contemplated even for a moment leaving her daughter.

Soon after the incident, Miss Koh saw an advertisement for a job with Honestbee and joined it as a personal grocery shopper.

The flexible hours and steady income gave her peace, but she says the best thing about the job was that she was able to take Chrislyn to work with her.

As she picked out produce, household essentials and other items, Chrislyn would be watching from the trolley or her mother's safe arms.

"There was no one else to look after my baby, and I would never leave her side ever again. So, I took her to work every day," Miss Koh says.

Soon, they were a familiar sight at the supermarkets they visited. Chrislyn would even help her by picking items off the shelves.

"We are supportive of her. She is hard-working and dedicated to her job," says Mr Chiang.

Miss Koh says her daughter is her hero. "I marvel at how she learnt to use her hand and her stump to feed and clothe herself.

"She is my inspiration. If she can do all that despite her condition, I have no excuse," says Miss Koh.

Amniotic band syndrome (ABS) occurs when a foetus gets entangled in the string-like amniotic bands in its mother’s womb. This restricts blood flow and affects the baby’s development.

Gleneagles Hospital gynaecologist Christopher Chong tells The New Paper on Sunday: “These bands can twist and tangle around the developing baby’s limbs, causing them to not form properly.”

In some cases, the affected limbs could even be completely amputated. ABS can also cause cleft lip and palate if the bands wrap around the foetus’ face.

Statistics vary on the rate of occurrence for ABS, with some saying it affects one in about 10,000 live births.

Dr Chong says doctors will usually monitor the pregnant mother’s womb to ensure that ABS does not become life-threatening.

This article was first published on May 8, 2016.
Get The New Paper for more stories.