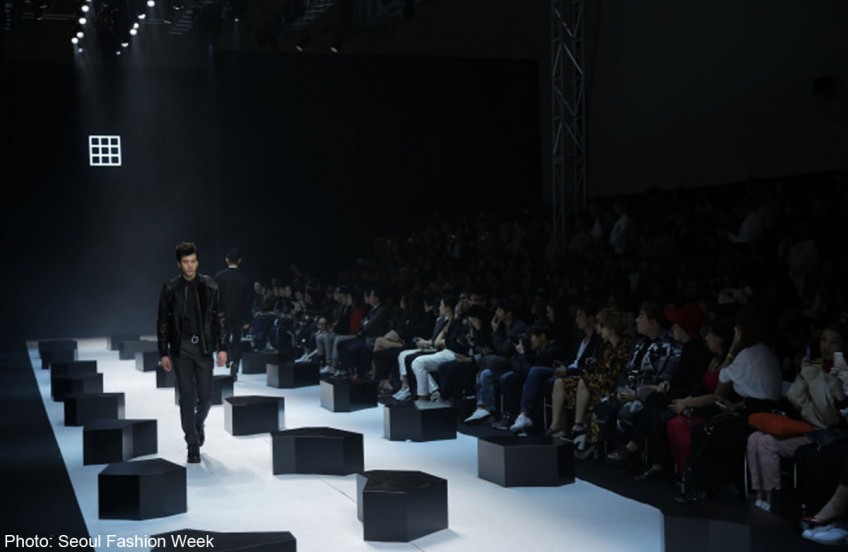 Menswear at Seoul Fashion Week has never been so diverse in styles and ideas as in the 2015 fall and winter collections.

Designers presented an interesting mix of styles from streetwear and traditional tailoring to avant-garde while exploring the relationship between social and political issues and fashion during the two-day menswear show on Friday and Saturday.

In contrast to previous collections for the chilly season, many collections featured diverse colors that delighted the eyes of fashion enthusiasts.

Jehee Sheen found inspiration for the next fall and winter looks from the abstract idea of "respect," which he feels Korean society needs the most at this time.

"I strongly sympathize with a number of social issues here, and I think what we need the most is respect toward each other," said Sheen after the show.

His approach to respect began with assigning a separate look for each of the 27 models ― an unusual plan for a fashion show where models on average show three or four looks. Based on his immaculate classic tailoring, Sheen presented the austere collection of blacks, with variations in flashes of burgundy and stone-inspired patterns.

"There's a saying in Eastern philosophy that 'every single stone has a different look,'" he said. He incorporated the old saying into his perfectly tailored black and gray suits, wool and cashmere long coats, zipper-detailed sweatshirts and sweaters. He elevated the typical fall and winter staples ― trench coats and long wool and cashmere coats ― by adding leather or fur details on collars.

Designer Moohong expanded his inspiration into international politics. With a doctorate in politics, Moohong unveiled his avant-garde collection with a word that may best represent what's happening around the world ― tension.

"This collection magnifies the concept of tensions prevalent in today's society. It is expressed in styles that contrast with the idea," the designer said backstage.

The designer took style references from the wardrobe of ancient Buddhist monks. He then presented them in atypical silhouettes for men and women ― a style that seems to have been influenced by his mother, established designer Moon Young Hee, also known for her avant-garde ready-to-wear collections in Paris.

All-black ensembles dominated the show such as an oversized bomber jacket paired with a maxi skirt and men's leggings. For women, asymmetric black and navy dresses delivered a sophisticated contemporary feel that could persuade sleek, modern women into his avant-garde fashion.

Ko Tae-yong of "beyond closet" brought the fun, playful side of modern men in the show inspired by the '90s Korean style icon "orange boys," referring to youngsters from wealthy families.

The show entitled "New Orange Boy" delivered an upbeat, playful ambience expressed through a navy pinstripe suit embroidered with witty, colorful patches. Models in the suits wore bulky fleece scarves that added warmth to the classic look. The designer expressed the cocky, confident and sometimes immature attitude of the "orange boy" with coats and shirts with embroidered lettering on the back, or on the oversized animal print coat paired with blue jeans and pink slip-ons.

Designer Jung Du-young of Vanhart di Albazar brought Italian chic to the Seoul runway in his collection inspired by the colors in paintings of Italian artist Valerio Adami. Jung's fall and winter collection was a celebration of colors ranging from green, yellow and orange to red and pink.

The Seoul Fashion Week runs through Wednesday at the Dongdaemun Design Plaza.