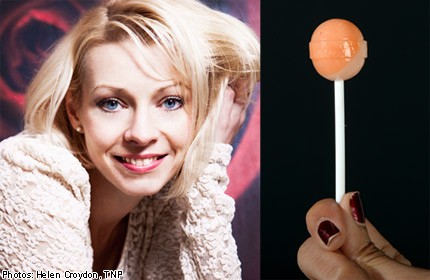 She is now billed as the advisor to sugar babies around the world.

Miss Helen Croydon, 35, the author of Sugar Daddy Diaries, is no stranger to such arrangements.

She got into the world of sugar daddies when she was 29 and fresh out of a longterm relationship.

Speaking to TNPS from the UK, she said: "I didn't want a serious boyfriend. I just wanted to meet men I found sophisticated and entertaining."

She had entered "older men, younger women dating" into a search engine and created a profile on sugardaddie. com.

She initially found the fact that men tried to pay her for dates quite shocking, but realised after a while that it was common.

"These men, they're used to paying other women to go out with them," she says.

At that time, her friend had just been dumped by a man who faked being committed, but left after they had sex.

"I realised that money was actually a more honest way of conducting a non-serious, short-term relationship," Miss Croydon says.

In the three years that she was a sugar baby, she had four regular sugar daddies and got physical with six men.

While she declined to tell us how much allowance was given to her, she said it amounted to thousands a month.

"I realised that these men were willing to pay as a way to assuage their guilt at not being able to commit to the women they were paying," she says. "But that doesn't mean they don't like the women."

She says that for her, a mutual attraction is extremely important. She makes it a rule to get to know these men better, to talk to them before meeting them and entering into any arrangements.

"Most of the time, these men are just lonely and looking for companionship.

"But it was clear to both the men and I that we were not looking for love, so it was a very honest relationship. More honest than normal relationships, actually," Miss Croydon says.

She started accepting an allowance 18 months after creating a profile. She says that though money changed hands, she has not met a man who expects her to have sex with him because he paid her.

"Meeting on a site like that, there's always going to be expectations that you'll ultimately have sex. It's just like other normal dating sites, sex will always be on your mind. If you like the person, it's normal to do it," she explains.

But she says sex is not the main concern of the men.

"If they simply wanted sex, they would go to an escort agency. They are paying for the companionship, not the sex."

One of the men she saw had told her: "If I was supposed to meet my girlfriend at 7.30, and I'm still stuck in the office at 7 and I cancel the date, most girls won't be happy with it. They won't stick around."

To the men, having a sugar baby is simply having a girlfriend, minus the drama and commitment, with added convenience.

She also says that these men are used to paying for other people in their lives and don't see paying for companionship as a big deal.

"There was this man I saw regularly. He said if he wanted to travel with a friend, but the friend couldn't afford it, he would pay for his friend to travel with him, solely because he likes the friend. It's the same, really," she says.

One man had flown her - first class, no less - to New York, and bought her so many things at a Prada boutique that she had to buy new luggage.

Another had insisted she carry only hand luggage when they travelled as he did not want to wait to collect baggage at the airport. Once they arrived, he handed her his credit card and told her to buy whatever she required.

She has since stopped seeing any of her sugar daddies.

"It's not fun anymore.

"I started to get turned off by men in real life because I thought, 'why should I date a normal man when I could be going out with a man that is funding my life?'

"There's also a shelf life for such things. I couldn't accept the power dynamics. Because these men are paying for me, I was expected to always be on my best behaviour.

They have control over the relationship, and it's very restrictive after a while.

For potential sugar babies out there, Miss Croydon advises them to always know the reason why they want to enter into such an arrangement.

"Only go into it if you genuinely like older men and if you're not looking for a serious relationship."

She says: "If you're meeting the man for the first time, always be sure it's in a public place. That way, you won't be forced into doing anything you're uncomfortable with."

She also thinks that it is important for sugar babies to follow their heart. If a man seems dodgy, it is not wise to meet up with him, she says.

"Of course, you also have to be attracted to the man. You won't be able to go through with it if there isn't any basic attraction in the first place."

For Singaporean sugar baby Amelia, the worry is what will happen in the future.

"No man will want to have a girlfriend like that. I'm still young so I'm not that worried, but this cannot go on forever."

Amelia says if the day comes that she meets a man she truly likes, she will end things with her sugar daddy.

But she doesn't know if she will tell her future boyfriend about her current arrangement with the man.

"It's a very sensitive topic, everyone will judge. I want to be honest, but it's very hard."