These women own the sky 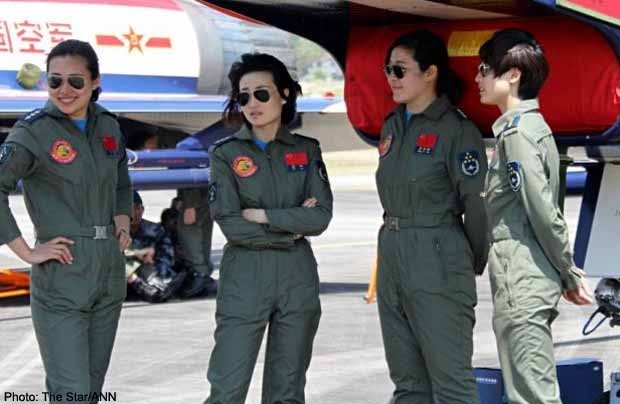 They added a dash of glamour.

Amid all the talks and deals at The Langkawi International Maritime and Aerospace Exhibition 2015 (Lima '15), it took a coterie of women pilots to steal the show.

All eyes were on China's People's Liberation Army (PLA) aerobatic team when the all-female pilots performed stunts in their Chengdu J-10 fighter jets at the venue.

Pilots Yu Xu, Tao Jiali, He Xiaoli and Sheng Yifei, all 28, were excited to take part in the world-famous aerospace and maritime exhibition.

"We train hard for our performance and flying the fighter jets requires us to be extremely fit," The Star quoted Ms Yu as saying.

"Being women, we have to put in more effort and go the extra mile in our physical training to be able to withstand the stress on our bodies.

"The stunts in aerobatic display are highly challenging and risky.

"We will let the whole world know that we are able to do things that many men think women can't."

They joined the air force 10 years ago, and they have accumulated more than 800 hours of flying experience.

The pilots are part of the PLA air force's August First aerobatic team. Langkawi is the second of their overseas show after Moscow's International Aviation and Space Salon in 2013.

It is also the four pilots' maiden flight overseas.

This year saw the participation of a record 512 companies from 36 countries - the best since its inception in 1991. A total of 110 planes and 78 vessels are also on display.