They want the perfect after-baby body 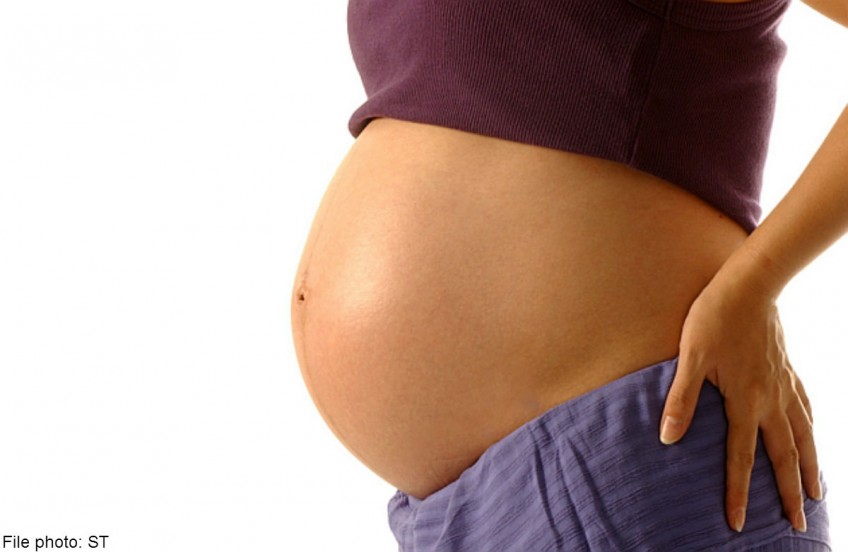 Because of peer pressure, she was determined to shed her pregnancy pounds as quickly as she could.

The extra weight made her feel insecure, confesses the now slender mother of two.

Says Ms Catherine Chew, 32, a full-time housewife: "What if I look older than my husband or look fatter than him? I will mind it.

"He would say he doesn't mind but when we go out, I want to look compatible with him.

"What if people think he is my younger brother? He is thin and people usually think he is not married."

The trend of mothers being desperate to lose their pregnancy weight gain quickly has come under the spotlight in recent years.

Celebrity mums here already have a weight-loss regime in place even before they pop.

The Huffington Post UK reported in April this year that nearly eight in 10 mothers feel pressured to bounce back into shape after giving birth.

It quoted a survey by two websites that was conducted after Simon Cowell's partner Lauren Silverman was snapped by paparazzi with a slim figure, just two months after baby number two.

The pressure is on when images of slender new mothers circulate on social media.

Says Ms Chew: "When you see your friend having a good figure very soon after giving birth, chances are you'd also want to look like them."

Her friends' comments about her body shape also spurred her on.

She says: "My friend said that after giving birth, I looked 'very auntie'. You will make the extra effort to look better."

Ms Chew, who put on 18kg during both her pregnancies, lost all of the weight within four months on each occasion.

She says: "I was very conscious about my weight. I always weighed myself and skipped carbohydrates."

The weight loss was fast initially but became stagnant, she says.

"I would not take rice and I would just drink soup, eat vegetables and proteins.

"Sometimes, I just went to sleep on an empty stomach."

She says it is important for mothers to continue to look good for the sake of their marriage.

"If you don't maintain (your looks), there can potentially be a lot of problems."

The desire of mothers to quickly regain their pre-pregnancy shape has also pushed up the demand for post-natal massage services. Providers are reporting brisk business.

Ms Ally Vijay, 42, owner of Babies-Bellies Javanese Massage & Spa, says they have seen at least a 40 per cent increase in demand in the past five years. And that's a modest estimate.

She says: "When I started out, I had one or two competitors in the market. Now, there are at least five competitors out there."

Madam Rokian Jantan, 51, of Traditional & Holistic Post-Natal Centre, says that there has been an increase of almost 70 per cent in demand so far.

She says: "It spreads by word-of-mouth. I have expatriates coming to me, asking for Jamu massage."

Her therapists are all fully booked every month, she says.

The misconception of post-natal massage as a slimming massage has fuelled the increase in demand, says Ms Ally.

"But it does help in reducing some inches, especially in the tummy area as the wrap compresses the tummy."

Ms Ally adds: "Many customers have come to us saying they want to lose 10kg to 20kg, but we have to explain to them.

"You take 10 months to put (the weight) on and you want to slim down drastically within two weeks - that's not right."

Doctors have also cautioned mothers against being too obsessed with weight during and after pregnancy.

Dr Arthur Tseng, an obstetrician and gynaecologist, says that he has come across a patient who gained only 5kg when she was 32 weeks into her pregnancy.

To stop herself from putting on weight, the woman "ate only one meal a day", says Dr Tseng,who is also a member doctor of Surgeons International Holdings.

The petite patient in her late 30s later gave birth prematurely to a baby weighing 2.16kg. The baby had to be admitted to the neonatal intensive care unit for several days.

"Insufficient weight gain during pregnancy could mean that there is a degree of malnutrition for the baby, which could lead to severe growth retardation or premature birth," he says.

He says: "Most women lose more than 4.5kg during childbirth. This includes the weight of the baby, placenta and amniotic fluid. During the first week after delivery, you'll lose additional weight as you shed retained fluids."

He says mothers should give themselves six weeks after delivery before they try to lose weight and if they are breastfeeding, they should wait two months.

"Dieting too soon can delay your recovery and make you feel more tired - and you need all the energy to adjust to your routine of looking after your baby. If you are breastfeeding, dieting can affect the milk supply."

It is reasonable to lose up to 0.5kg a week through diet and exercise, he says. It may take six months or even longer to return to pre-pregnancy weight, whether a mother is breastfeeding or not, he adds.

Being realistic about weight loss and doing it in moderation is key.

"If you're patient and give your body a chance to do its work, you may be surprised at how much weight you lose naturally, especially if you are breastfeeding.

"Remember, there is no secret to weight loss after pregnancy. It takes a healthy diet, a commitment to physical activity and plenty of patience."

Famous mums who fought the flab

Yoga instructor and wife of 30 Rock star and notorious hothead Alec Baldwin, was working out several times a week during her pregnancy.

Just months after baby Carmen was delivered, Hilaria was on TV, tight yoga pants and all, showing off moves to help ordinary mums get her kind of figure.

In 2007, the former No Doubt star admitted that she was obsessed with her weight.

She kept up a gruelling exercise regime with a personal trainer until the last two weeks before the birth of her first son Kingston.

If that wasn't baffling enough to us mere mortals, she appears to have pulled the same trick twice since. She gave birth to Zuma Nesta Rock in 2008 and the fantastically named Apollo Bowie Flynn Rossdale in February this year. And she's bounced back to her svelte self.