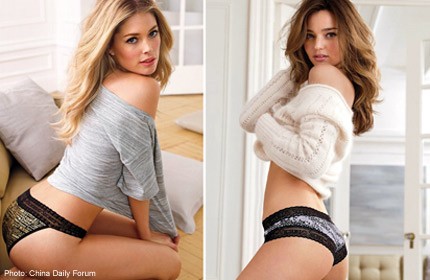 While every human being is beautiful, there are a few who stand out from the crowd owing to having been blessed with exceptionally attractive physical characteristics like smooth skin texture and soft facial features.

In addition to strutting on the ramp, there are several other ways in which a 'beauty with brains' can augment her income and some who have managed to prove it.

The top 10 supermodels of the world earn a princely sum of at least US$3 million (S$3.7 million) to a whopping US$45 million.

Who comes up tops?

Candice Swanepoel, a Souta-African, who at 23 years of age is able to take home a package of US$3.1 million, is the youngest and also tenth in the list of ten highest paid female models in the world.

Although she is believed to enjoy frequent visibility in Victoria's Secret army, critics find her skinny to the point of being scary.

No. 9: Carolyn Murphy
Occupying the number nine spot is Carolyn Murphy from Florida, USA, who has proved through her timeless features, skin and grace that age need not be barrier to modeling. In spite of being well into her thirties, she still advertises some of the prestigious global brands and is able to muster US$3.5 million in her kitty.

No. 8: Lara Stone
Lara Catherine Stone broke into the list of ten highest paid female models when she added campaigns like Prada and Versace to her already envious portfolio featuring Calvin Klein. With her earnings amounting to US$3.8 million, this Dutch beauty is just beginning to make her presence felt in a big way.

No. 7: Miranda Kerr
Miranda Kerr was the first Australian to have been honoured with an inclusion in Victoria's Secret Angels and has certainly never looked back since then. Currently earning US$4 million, this fresh beauty from down under has several well-known brands under her belt and is looking forward to a gloriously lucrative walk ahead.

No. 5: Doutzen Kroes
Doutzen Kroes is a glamorous Dutch beauty who is associated with brands like L'Oreal and Calvin Klein Eternity and considered nothing less than a wonder by her fellow countrymen courtesy her looks. With US$6.9 million, she is at number five in this countdown.

No. 4: Adriana Lima
'Ethnic' is what Adriana Lima is best described as and much of the US$7.3 million that she earns is attributed to her inter-racial look because it makes her acceptable to all races worldwide.

No. 3: Natalia Vodianova
Natalia Vodianova owes a large percentage of her earnings to fragrance brands and over a period of time has diversified to lingerie and shoes too all of which have escalated her income to a whooping US$8.6 million.

No. 2: Kate Moss
Kate Moss continues to rake in the moolah courtesy of her numerous endorsements and now intends to add a biography to her list of accomplishments. Carrying home US$9.2 million certainly lends an aura of class and this model has plenty of it.

No. 1: Gisele Bundchen
Topping the countdown is Brazilian Gisele Bundchen who earns US$45 million from her profession which includes walking the ramp, modeling for as many as twenty international brands and posing for magazines.