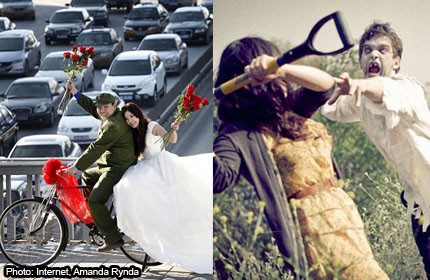 Every couple wants their wedding to be special.

Whether it is the engagement party or the ceremony itself, these couples have gotten creative to make sure theirs is an unforgettable occasion.

A couple in the US had a zombie-themed wedding photoshoot that proved very popular on the internet.

Photographer Amanda Rynda, who works with the bride-to-be, Juliana Park, was asked to shoot something fun for their engagement.

Ben Lee, the groom, did not want to lose his sense of manliness so they decided on the theme of a zombie invasion.

The pictures quickly went viral, and the blushing bride admitted that she had underestimated the power of the web.

While this American couple eschewed the tacky in favour of the quirky, over on the other side of the globe in China, lavish weddings banquets continue to make headlines.

Most recently, netizens were abuzz about news of a woman in China giving her new son-in-law a 4 million yuan luxury Bentley Continental car.

Couples in China have proven themselves to be extremely creative, with many choosing to travel in flashy and over-the-top modes of transport on their wedding day. Grooms in China often have to flex their creative muscles and think of new ways to ferry their brides in style. Many have gone so far as to travel with their wedding parties in decorated public buses, bicycles, and motorcycle parades.

Last year, a Singaporean couple's unique 'Ah Bengs and Ah Lians' wedding also caught the attention of netizens when a video of their wedding went viral online. The couple's video featured their bridesmaids and groomsmen completing games and tasks while dressed in the traditional Chinese samfoo and white singlets.