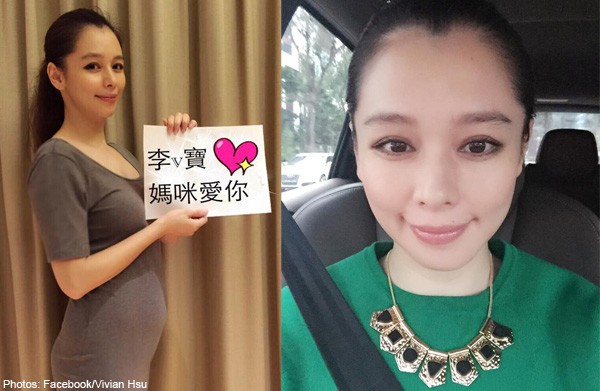 Lonely in Singapore?: Vivian Hsu has been living here for a year and has not made many friends yet. She cried, grateful that she has found one Singapore friend who has been teaching her our local culture.

In a Facebook post on Friday, Hsu called the pregnancy a "surprise" and "heaven sent", and said it came at a time when the self-professed workaholic promised to clear her work schedule in 2015 to focus on starting a family.

She also posted a photograph of herself sporting a baby bump and holding a placard that says, "Mummy Loves you".

Hsu added that the past three months have been a whirlwind despite not being able to make the news public, as per Chinese custom.

The actress wrote that she frantically searched online for what she should be eating, and read up about nutritious meals that "hopefully will be beneficial to you will but not make mummy fat".

She noted that the baby has been "considerate", as she has not suffered from morning sickness but instead, her appetite has increased tremendously.