From waitress to Gwiyomi star 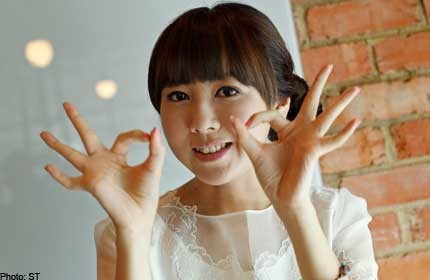 KOREA - She was once waiting tables in a restaurant in South Korea, but ever since her cutesy ditty music video for song Gwiyomi went viral online earlier this year, 23-year-old Hari has turned into a bona fide K-pop star.

Gwiyomi, which means "cutie" in Korean, is a saccharine love song accompanied by a series of hand gestures, such as using fingers to make bunny ears or heart shapes.

The song, which is about a girl telling her boyfriend to never leave her, has sparked off a flurry of spoofs by celebrities and netizens.

"At first, I was shocked by the popularity of the song. I didn't expect it. But, now, I really relish the attention," said Hari, who was speaking to the local media on Monday.

While the fad started off with South Korean stars like Girls' Generation's Sooyoung and actor-singer Kim Hyun Joong performing the dance on videos and variety shows, it has since spread abroad. Local versions include a parody of a Gwiyomi battle between local movie Ah Boys To Men actors Tosh Zhang and Ridhwan Azman.

The girly Hari is cuteness personified in real life as she peppered her sentences with giggles and child-like gestures at the press conference here held at the Warner Music office. It marked her first public appearance outside South Korea.

The earnest singer said that she has watched most of the Gwiyomi-inspired videos and is most impressed by one done by a female South Korean police officer.

A search on popular streaming site YouTube threw up more than one million Gwiyomi-related videos, with the top parody video garnering more than eight million views.

The massive number of spoofs had many netizens guessing who came up with the original Gwiyomi song.

During the press conference, Hari took the chance to clarify that her Gwiyomi song is a combination of old and new - the melody was created by her record company, while the lyrics and gestures had already been circulating among Koreans for a while.

She said: "A producer friend of mine felt that my voice would suit the cuteness of the Gwiyomi song."

Not only has Hari's newfound popularity made her famous back home, but it also gave her a chance to ride a plane for the first time - though she didn't quite enjoy the flight to Singapore.

"I have a severe fear of heights, so I had to take medication to calm myself down. I was still very scared and I was sweating," said Hari.

Her phobia of heights began in her primary-school days, when she would take a longer route home just to avoid crossing an overhead bridge.

Now, the overnight sensation will be moving from her weekly karaoke sessions into a studio to record a new album.

While a launch date has not been confirmed, one thing fans can count on is that, according to Hari, her new songs will be as sugary-sweet as Gwiyomi.