What's wrong with a kiss on the lips? 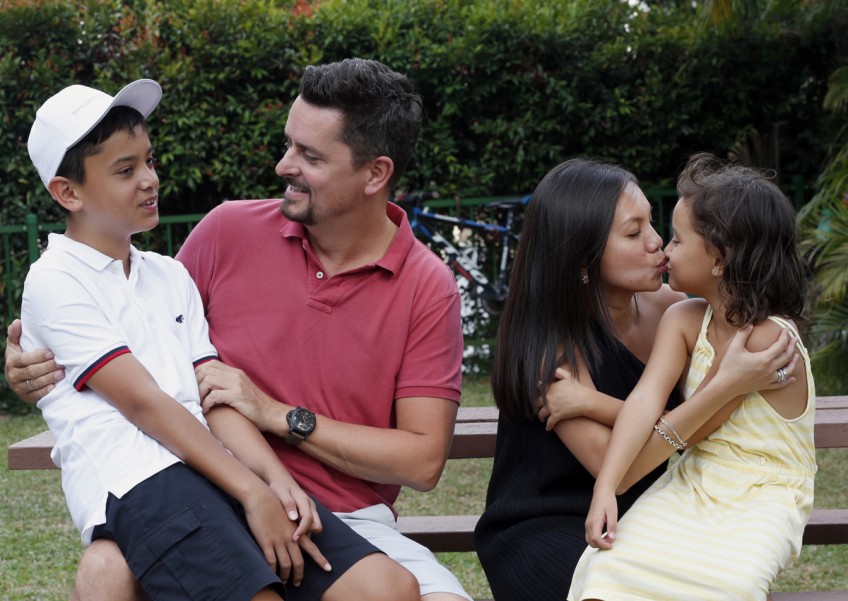 Mr and Mrs Oliver Plogmann stopped kissing their 12-year-old son, Noah (left), on the lips when he was four. Mrs Plogmann- Koh still kisses daughter Noemi, six, on the lips.
The Straits Times

Madam Kanniakumari Kulasekaralagoo and her husband were not raised by parents who kissed them on their lips. "But when our children were born, they felt so precious to us that we started pecking them on the lips and we have not stopped since," she says.

"It's our way of showing our children that we love them, it has become part of our family culture."

Although she and her husband also plant kisses on their children's cheeks and forehead and hug them, she feels that pecks on the lips create a special bond between them and their two sons, aged 11 and eight, and daughter, six.

"It makes us feel closer to them and vice versa and we would like to do it for as long as they allow us to," says the 41-year-old part-time teacher at an enrichment centre.

In fact, it is part of the children's routine to give their parents a peck on the lips at bedtime and when saying goodbye. They also give their father, procurement manager Shivakumar Deshinamorthy, 42, a quick kiss on the lips when he returns home from work.

American child psychologist Charlotte Reznick, however, warns parents against kissing their children on the lips as it is "too sexual". Her comments, published in 2010 when Hollywood star Harry Connick Jr was pictured pecking his eight-year-old daughter on the lips, sparked a heated debate online late last month after the comments gained traction on social media.

Dr Reznick says the mouth is an erogenous zone which "can be stimulating" and subsequently cause confusion for children.

She says children might associate kissing with sexual or romantic activity between parents and wonder why their parents are engaging in the same activity with them too.

As children reach age four, five or six and their sexual awareness comes about, she says a kiss on the lips can be stimulating to them.

But Ms Agnes Teo, a clinical psychologist from Th!nk Psychological Services, a private psychological and counselling service here, does not think it is too sexual for parents to kiss their child on their lips.

"Kissing a child on the lips can be a parent's way of showing love and affection. It is the same as holding hands, hugging or kissing on the cheek, whichever the parent and child are more comfortable with," she says, adding that she does not think there is an age limit to the act, as long as the child is comfortable with it.

"But once a child feels embarassed about being kissed on the lips or refuses to do it, parents should respect his wishes."

Importantly, she adds that parents should set clear limits for their children. For example, they can tell them that they should limit kissing on the lips only to their parents as it is a more intimate behaviour. For other close relatives or friends, a hug is enough.

Madam Kanniakumari says she and her husband set clear limits for her children from day one to kiss only daddy and mummy - and not others - on the lips.

They also stopped kissing their older boy in public a few years ago after they found he was not comfortable with it.

Madam Kanniakumari recalls: "Usually, I would hug him and give him a peck on the lips before sending him off to school. But one day, he shrugged me off after I hugged him. Later, he told me a couple of his schoolmates teased him when they saw me kissing him on the lips. I realised my boy was growing up and becoming more conscious of the people around him."

Housewife Olivia Plogmann-Koh and her husband stopped kissing their 12-year-old son, Noah, on the lips when he was four.

"After he started school, he felt it was uncool to be kissed by his parents and would turn away whenever we tried to kiss him."

Last year, their daughter, Noemi, six, also started to become shy about being kissed on the lips by her husband and he has likewise stopped planting kisses on her lips.

Mr Oliver Plogmann, 45, who is German and a senior consultant in the aviation industry, feels that as children grow up, the way they express physical affection changes and parents have to respect that.

He says: "It doesn't mean they love us less. We still kiss them on the cheeks and hug them. I also engage in a lot of man-to-man talk with my son now that he's older."

Mrs Plogmann-Koh, however, hopes to kiss her daughter on the lips for as long as she allows her.

She says: "Having grown up with parents who were not physically affectionate, I wanted to be close to my children and kissing on the lips is a very close thing. It's more than showing affection. It also shows trust: My daughter trusts I will take care of her and protect her."

While the "lip-kissing" culture may be more socially and culturally acceptable here today than it was in the past, lawyer Claire Nazar, 44, a council member of non-profit organisation Families for Life, feels it is still not a common sight in Singapore.

She says: "Singaporeans are generally quite reserved."

She admits that she and her husband Boaz, 49, also a lawyer, are among the reserved folks. They have a daughter, 17, and a son, 11.

She says: "We do not kiss our children on the lips and I don't see my friends or relatives doing so either. I don't recall my parents kissing me on the lips, though when my son was about three or four, he would occasionally give me a peck on the lips to say goodbye before going to school."

Her daughter Hosanna says she does not feel less loved.

She says: "My parents still hug my brother and me and kiss us on the forehead. We also hold hands and say 'I love you' to one another. As I grow older, however, what makes me feel loved is not so much physical affection, but my parents' willingness to spend time with me, so we can share our opinions and thoughts about things in life."

Neither do Kevin Ng, 42, a teacher, and his wife, Denise Philip, 39, a housewife, kiss their children on the lips. They have four children, aged three to 11 .

Says Mr Ng: "We want to be more physically affectionate towards our children than our parents were with us, but while we hug them before they sleep and kiss them every day on the cheeks before saying goodbye, we stop short of kissing them on the mouth."

It is not that he thinks the act is sexual, though, only that he was brought up to think that "kissing on the lips should be reserved for only one's spouse".

His wife, Denise, agrees. "To me, kissing on the lips is a romantic thing. It's something that I do only with my husband."