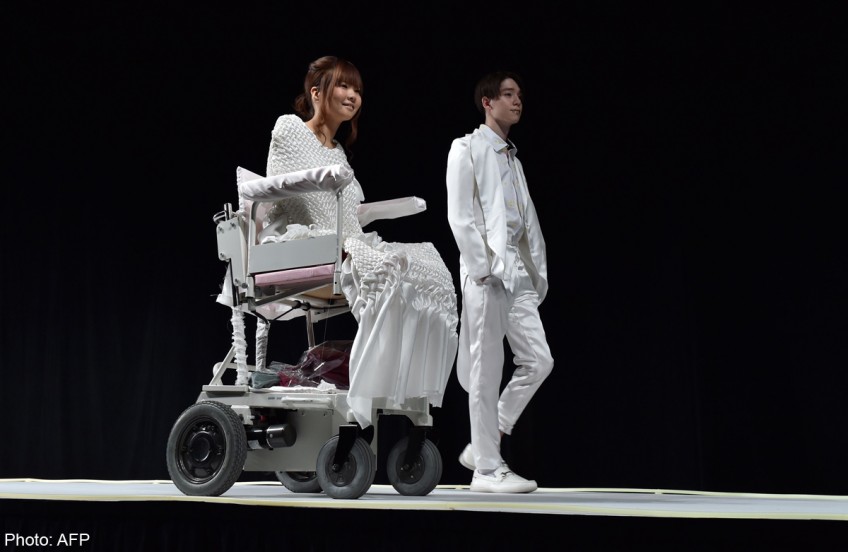 TOKYO - A Japanese designer is challenging accepted ideals of beauty at Tokyo Fashion Week, with an easy-to-wear collection unveiled on the catwalk by models who are blind, wear prosthetic limbs or use a wheelchair.

In his unorthodox show for the "tenbo" brand on Wednesday, Takafumi Tsuruta chose a mix of disabled and able-bodied models to showcase his quirky designs, with several of them donning bright yellow wigs.

He is the latest designer to celebrate disability at a major fashion week, after an actress with Down syndrome and a male amputee model graced runways this year in New York and Milan.

"We are introducing something called 'people's design'," Tsuruta said after the show. "The clothes are aimed at everyone in the world. It's fashion's responsibility to have trendy and easy-to-wear clothing."

His Dream-themed autumn/winter collection included details such as magnetic buttons and reversible jumpers, aiming to reach a wider audience than typical high-fashion items.

Ami Sano, who was born with a rare disorder that left her without limbs except a left foot, said backstage that she "really didn't dream" she would end up modelling at fashion week.

In the show's moving finale, the 24-year-old appeared before the packed-out hall in a white wedding dress in her wheelchair.

"Simple clothing for us is great. People in general will be thankful for this type of design, and there are various ways of arranging the pieces," she said.

Opening the show was blind model Rina Akiyama, 27, who won a gold medal for swimming at the London 2012 Paralympics and works at a pharmaceuticals company.

Akiyama, who wore a dotted trapeze dress inspired by Braille, said it was "very rare" for such a fashion event to take place in Japan, which is gearing up for the Olympics and Paralympics in 2020.

"There are a considerable number of disabled people who don't leave their homes," she said. "It would be great if chances like today increase."

Last month, American actress Jamie Brewer, who has Down syndrome, took a turn down the runway in New York in an A-line black dress designed by Carrie Hammer.