Why Chen Liping agreed to be Mary Chia envoy 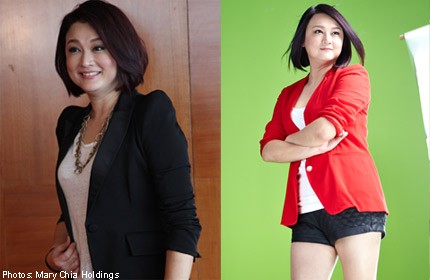 Television star Chen Liping is known as a heavyweight - in reference to her acting career, as well as her physique - but the 48-year-old is now determined to shed some pounds.

With the help of beauty and wellness chain Mary Chia, the rotund-looking Chen - who is now the company's celebrity ambassador - is undergoing slimming treatments and making a conscious effort to watch what she eats.

Speaking to reporters at Swissotel Equinox, the actress said that she recently had an epiphany about her size.

"I felt winded on set," she said. "That's when I knew that I had to do something (about my health).

"It is not about the numbers (on a weighing machine), but my health."

Madam Mary Chia, 63, the executive chairman and founder of Mary Chia Holdings, said in Mandarin: "A woman does not have to worry about age, she has to worry about her health."

She said that she had wanted Chen to be the chain's celebrity ambassador for a long time.

When Chen was asked why she decided to be the face and body for Mary Chia, she declared that the timing was just right.

The 360 Degrees Complete Transformation Skin and Body Approach programme, which was unveiled yesterday, does not require one to ingest pills. In fact, this was one of the reasons that Chen agreed to be Mary Chia's ambassador.

The actress weighed 73kg when she began treatment and, in three weeks, dropped to 67kg.

Undergoing the treatment has busted many a myth for the actress.

"I used to think that dieting meant not eating for many days, then rewarding myself with whatever I wanted to eat afterwards," she said.

When watching your weight, there will always be a type of food you crave. For Chen, it is meat.

"When eating shabu shabu, of course you would want the fattiest piece of meat. Now, I have to eat only lean meat or white meat," she said with a laugh.

"However, (Madam Chia) has assured me that I don't have to stop (eating fatty meat) completely. I just have to wait until my weight stabilises."

Chen and Madam Chia were both quick to assure reporters that the treatment was not a tiring or painful one.

Chen exclaimed: "It feels like a massage. With this treatment, it's like a two-for-one deal. I get a massage and I lose weight."