Will this bold red gown get cheers or jeers 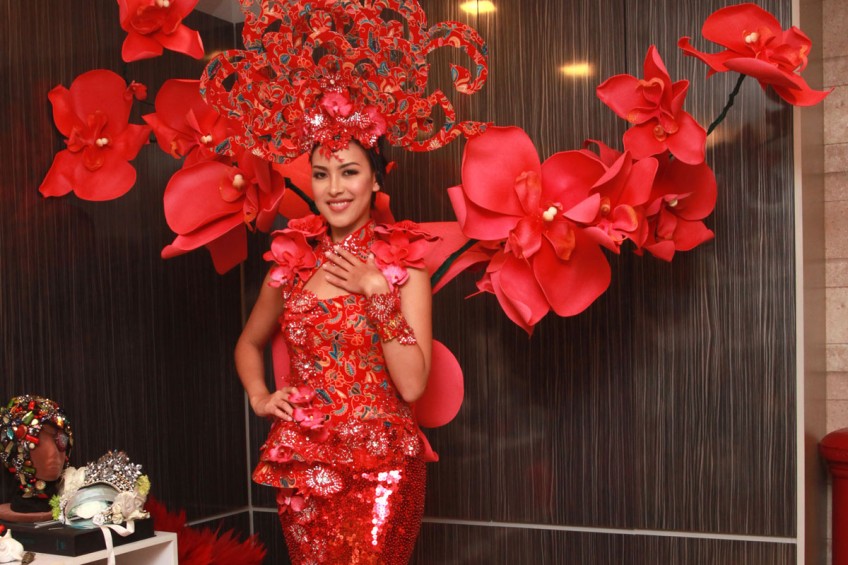 He took on the challenge of designing this year's Miss Universe Singapore (MUS) national costume for the first time and in doing so, has opened himself up to the kind of backlash that had plagued his predecessors.

But local couturier Frederick Lee, 45, stands by his ethnic-inspired creation for MUS winner Lisa Marie White, who will compete on the international Miss Universe stage in Las Vegas on Dec 20.

Her larger-than-life outfit is a bold red gown, featuring a cheongsam top made of the trademark red batik fabric of the Singapore Girl kebaya attached to a heavily-sequinned mermaid skirt.

The finishing touch is a 3m-wide structure harnessed on her back, comprising large red foam orchids.

For this, Mr Lee drew inspiration from the kavadis that Hindu devotees carry during the Thaipusam procession.

On top of that, he also wanted to pay homage to the fact that the Singapore Botanic Gardens became, this year, the nation's first Unesco World Heritage Site.

A total of 50 red orchids of varying sizes adorn the outfit, a tribute to Singapore's Golden Jubilee.

Miss White was at Mr Lee's Aljunied Industrial Complex office-studio to try the costume on for the first time on Wednesday.

That was also where Mr Lee told The New Paper: "When you talk about the national costume, what comes to mind is an outfit that best represents the energy and spirit of the country.

"The batik, for example, has travelled to the four corners of the world, thanks to our Singapore Girl.

See also: Upsetting that S'poreans not supportive of me, says Miss Universe Singapore

Mr Lee has also sponsored several evening gowns, both custom-made and ready-made from his Frederick Lee Couture collection, for Miss White at the international pageant.

The celebrated designer knows all too well the jeers that past national costumes have been subjected to and is ready for when they are tossed at him.

"There will always be haters, but I will take the comments constructively and take them into consideration if there is a next time," he said.

"What is more important is that (the dress) captured the essence of our country. I think I have delivered and Lisa looks better than I have ever imagined in it."

Like Mr Lee, past designers have also banked on the multiracial aspect and tapped on the use of flowers, with red being the colour of choice.

On how he sets himself apart, Mr Lee said simply: "Every designer has a different interpretation of the national costume. I hope this gown will be memorable."

He deliberately stayed away from typical national icons like the Merlion and Vanda Miss Joaquim.

"It would have made our contestant look like a mascot.

"I did consider something more modern and playful, but (my creation) is a good balance of that, plus it captures the Singapore spirit," he said.

Miss White, who took about 30 minutes to put on the costume, said: "I have never felt so extravagant as I do right now and I cannot imagine wearing anything else."

She is also not one to pay attention to possible brickbats.

"You can never please everybody, but I like it and that's what matters. I'm going to rock this dress," she said.

Looking good? Or too painful to draw a second look?

Here are four national costumes that ruffled feathers for being too garish, too tame, too peacock-like and not Singaporean enough

The Merlion concept behind the dress did not go swimmingly with the public, who slammed it for looking "garish" and "hideous".

Its designer, then 18-year-old Nanyang Academy of Fine Arts fashion design student Riyan Haffys, defended the dress and told The Straits Times: "It is a costume, not a national dress, so I can go a bit crazy with it."

It was picked from 10 designs submitted by students of the school in a competition.

It drew mixed reactions, with local fashion designer Hayden Ng saying it was "not over-the-top enough" to be a costume.

Was third time a charm for Mr Riyan, who returned with yet another costume despite heavy criticism over his previous attempts?

His green mermaid dress creation, coupled with orchids and a giant yellow fan, drew flak for resembling a peacock.

Some netizens were upset that it was created by a foreign designer while others said it did not represent Singapore enough.

This article was first published on November 20, 2015.
Get The New Paper for more stories.