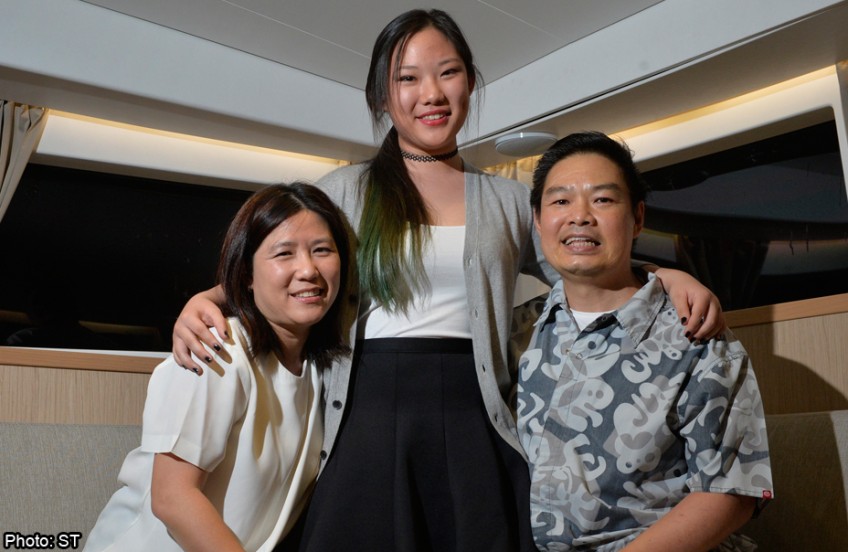 Abigail Lee with her parents Sydney and Debbie Lee.

Ms Abigail Lee's longstanding interest in the written word has served her well, even when she found school life challenging.

Her winning entry about a trip to a carnival, selected from among 9,000 essays over a few rounds of competition, showcased "good writing skills combined with the witty use of a plot twist", according to a statement by Team Acts, whose business interests include running tuition centres.

Abigail's mother, Mrs Debbie Lee, 47, says that she and her husband, church worker Sydney Lee, 48, "encouraged her to write, to express herself and crystallise her thoughts".

It was also a way for the oldest of their three children to "destress", adds Mrs Lee, a stay-at-home mum who works part-time as an adjunct lecturer at Singapore Institute of Management. The couple have two younger sons, Ethan, 14, and Elijah, seven.

Abigail's teachers also encouraged her to write, including those who taught her in the United States and China, where the family lived from 2001 to 2008.

They had moved from Singapore on account of Mr Lee's job at the time as a regional marketing manager at Sony Electronics.

After living abroad since she was two years old, the transition back to Singapore when she was 10 was "rough", says Abigail, who started a diploma course in film, sound and video at Ngee Ann Polytechnic this year.

Teased for not speaking Mandarin in Primary 4 then, she also found mathematics difficult, after studying it at an elementary school in San Diego and at an international school in Shanghai.

"English was one of the only things I was good at. I worked at making it my best subject," she says.

Mrs Lee says her daughter "picked herself up" during those tough times.

"She's always been full of spunk. I remember her as a toddler running in church, then falling down. She would pick herself up. After the third time she fell, she said, 'Be careful'," adds Mrs Lee.

What sparked your interest in writing?

Abigail: My mum introduced me to a lot of books as a child. I loved Lewis Carroll's Alice In Wonderland and Shel Silverstein's The Giving Tree. Dark yet whimsical works have always attracted me, a quality that has transferred to my writing.

Mr Lee: Abigail has always been inquisitive and extroverted. She chatted with strangers at theme parks such as Disneyland in the US.

Mrs Lee: From the time she was a baby, we would read to her. At three or four, she started reading.

How has living abroad influenced your outlook?

Abigail: I had an idyllic childhood in the US, filled with popsicles and looking for bugs underneath stones. But I didn't get to hold on to many friends. When we moved back to Singapore, I made an effort to make friends.

Mrs Lee: We had always wanted to give our children a broader world view. The kids also experienced different educational systems which were a bit more relaxed. It's tougher here and they appreciate the discipline.

Mr Lee: We had to fend for ourselves, which brought the family closer together. Going abroad also gave the kids a different mindset. In Singapore, we're afraid to try. If you fail, there's a bit of a stigma. In the US, they were encouraged to try. If they failed, it was part of learning.

Mr Lee: When the kids were younger, I was a sergeant major. I wanted them to have tidy rooms and to finish their schoolwork.

By the time they were in upper primary and secondary school, I became more of a coach. I coached Ethan in football and Elijah in rugby, and taught Abigail to swim.

Mrs Lee: We've told them they should put in their best effort. We've also explained that, if they work hard, there would be more opportunities available.

My husband reminds me not to sweat the small things. For example, I believe they should write neatly. As a lecturer, I read scripts that are sometimes hard to decipher.

Abigail: My parents have always been trusting. Because they didn't set high expectations, I wasn't scared of them. They would encourage me.

How did you discipline Abigail?

Mrs Lee: They weren't terribly difficult children, but on rare occasions, when they were younger, I used to spank them on the bum with a wooden spatula, if they threw a tantrum, for example. We had a 50-cent fine system if they were rude or unkind. It's for our holiday fund.

Abigail: Now, it's more the revoking of privileges. If I didn't do my homework, I'd get my phone confiscated or not be allowed to go out with friends.

Mr Lee: I was travelling a lot when I was in Sony and left the disciplining very much to my wife. When I came home, if I'd heard, for instance, that they hadn't tried their best in something, I would have a talk with them.

If the parent-child roles were reversed, what would you do differently?

Mr Lee: I wouldn't change anything. She had a wonderful experience growing up and I treasure our relationship.

Abigail: Parents don't realise when they nag face to face, it's more grating. Sometimes when I'm upset, mum will write me a post-it note to cheer me up. If I were the parent, maybe I'd write things down on a card and ask the kids if they want to talk about it.

Mrs Lee: I wouldn't change anything. I appreciate her resilience and the fact that the children went through so many changes when we lived abroad.