Working out how to put kids through varsity 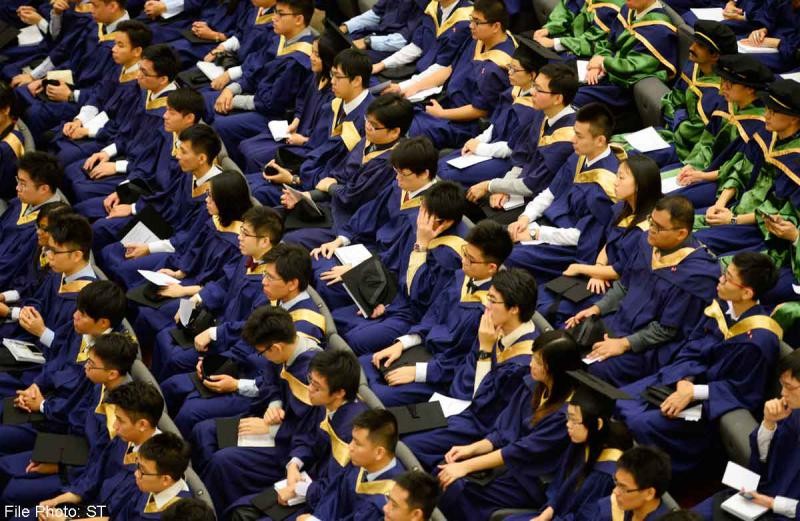 In about three months, my third child will be arriving, and along with him, sleepless nights for the next six months.

One thing that I am already thinking hard about is how to fund his university education in about 20 years' time. And based on some simple calculations, the worry index is rising.

This amount does not include things like exam and miscellaneous fees or living expenses.

If this trajectory continues over the next 20 years, fees could rise to over $90,000 for the four years of university education.

Even if we take a lower estimate - for instance, expecting fees to rise at 2 per cent a year - the fees will rise to about $55,000.

For someone with three children, it's even worse - the figures get multiplied accordingly.

Apart from putting money aside in an education savings plan, for example, what other options are there?

One solution, or at least part of it, comes in a four-letter abbreviation: PSEA. The Post-Secondary Education Account, an account administered by the Education Ministry that allows Singaporeans to pay for their post-secondary school expenses, is set up after each Singaporean child turns 13.

Singaporeans can use the funds in the PSEA to pay for fees in local polytechnics and universities, and also for skills-related upgrading courses.

The PSEA has two major benefits that make it an ideal way to save for your child's education.

One is that it is linked to the Child Development Account (CDA), another account set up for Singaporean babies.

From July 1, the Government will deposit $3,000 in every Singaporean child's CDA under the recently announced First Step programme. It will then match every dollar put into the child's CDA for the next $3,000, for the first and second child.

When the child turns 13, the funds in the CDA are transferred to the PSEA, where they earn a fixed interest rate of 2.5 per cent, the PSEA's second major advantage.

The benefits are even better for the children who come after. For the third and fourth child, the Government will match every dollar saved up to a cap of $12,000.

Assuming I don't tap the CDA for medical or kindergarten expenses, my son will have a tidy sum of $21,000 in his PSEA when he turns 13.

Another way of looking at this, in financial terms, is that the initial $9,000 invested into the CDA/PSEA will yield $25,586 some 20 years later. This works out roughly to a yearly return of slightly above 5 per cent.

An endowment plan typically pays 3.5 per cent a year, a rate that is not guaranteed.

Yes and no. There are many limitations to the PSEA.

First, many individuals may not want to lock in such large amounts for such a long period.

The funds can also be used only for specific purposes, unlike returns from endowment plans which are paid out in cash.

But if the parents are already intending to save for the long term, then this argument is less relevant.

Endowment or savings plans also lock you in for the long term; they just do it by the drip approach, taking a bit every month.

The bigger problem with the PSEA is simply that it will not be enough. Most parents will start to deplete their child's CDA early on. Childcare costs are high and parents will use the funds in the CDA first before turning to cash payments.

That's perfectly fine as that is what the CDA funds are for in the first place, but it will mean a lot less funds in the PSEA to start with.

And even if you leave the CDA funds untouched and move them to the PSEA, the calculations above suggest that the sum accumulated will not even come close to paying for university fees.

In other words, unless the Government changes the scheme to make it more generous, do not rely solely on the PSEA to pay for your children's education.

Therefore, I will probably have to supplement the funds in the PSEA account by investing in shares, by buying into a basket of exchange-traded funds via a regular savings plan .

That seems to be the most time- and cost-efficient way of ensuring good returns over a long period.

Lastly, I would not consider myself a failed parent if my child ends up having to take study loans to pay for his fees.

Asian parents sometimes try too hard to provide everything for their children. Who knows, making him pay for his education could even make him cherish his education that bit more.

But if he does borrow, the funds in the PSEA will mean that he will end up taking a smaller loan. With education costs on an inexorable upward march, every little bit helps.