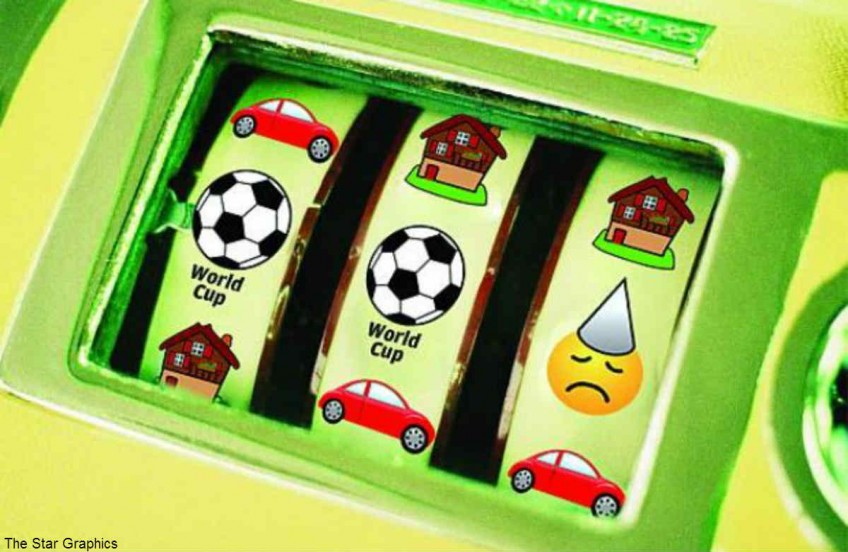 IPOH - Life after the World Cup has become especially painful for football punters who mortgaged their homes and used their cars as collateral to place bets with bookies.

Some even got their relatives to chip in for a share of the huge takings that they were so sure of. They lost big time when results turned out to be highly unexpected, or even shocking, such as Germany's 7-1 thrashing of host Brazil.

The punters now have to deal with loan sharks and moneylenders who want them to pay up, besides some very worried relatives.

In Ipoh, six such punters have, in desperation, come to the Perak Bari­san Nasional Public Service and Com­plaints Bureau for help.

They had raised almost RM1mil for bets and lost it all.

Bureau chief Mohd Rawi Abdullah said the six men, aged between 35 and 60, started seeing him after the month-long tournament began, with the latest on Monday after the Ger­many-Argentina final.

"The amount of money they lost is close to a million ringgit," he said, adding that the bets were made with bookies and via websites on the Internet.

They suffered losses when Ger­many tore Brazil apart in the semi-finals.

"The punters told me they had bet on certain strong teams and it had all backfired. Most of them were on the verge of crying and were pleading for help.

"They keep asking me to get the loan sharks and moneylenders to give them a grace period of six months to a year to settle.

"These people are in a fix because families have no idea that they have lost so much.

Police indicated that it was difficult to determine the actual number of people who have been badly burnt by World Cup betting.

"It is unlikely that punters would lodge a report against the bookies knowing that gambling is illegal," Federal Secret Societies, Gambling and Vice Division principal assistant director Senior Asst Comm Roslee Chik said.

He said that some 454 people were arrested during various Ops Soga raids between June 26 and July 14 for being involved in gambling rackets.

This year's series of Ops Soga raids saw a spike in the number of arrests compared to 2010 where 227 people were nabbed, including syndicate members and people who placed bets during the World Cup season.

Malaysian bookies have also made their presence felt beyond our shores. Four Malaysians were among eight people arrested in Los Angeles over an illegal gambling ring that logged in millions of dollars in bets for World Cup games, it was reported yesterday.