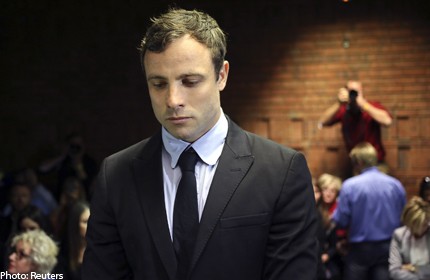 JOHANNESBURG - Paralympian star Oscar Pistorius's visit to a nightclub while on a charge of murdering his girlfriend was "unwise", his family admitted after the sprinter was involved in a drunken brawl.

Pistorius, who is on bail during a break in his trial, suffers from an "escalating sense of loneliness and alienation," the family said in a statement on Tuesday night.

"This, we believe, is underlying some of his self-harming behaviour." Local media reported that Pistorius was evicted from the VIP section of a plush Johannesburg nightclub at the weekend after an altercation with another patron, Jared Mortimer.

Mortimer said the sprinter, known internationally as the "Blade Runner", became aggressive and started poking him in the chest. He responded by pushing the double-amputee, who stumbled over a chair and fell to the ground, he said.

The family statement, signed by the runner's uncle Leo Pistorius, denied that the athlete had been the aggressor, accusing Mortimer of "peddling untruths designed for maximum attention and maximum damage".

"We wish to categorically state that there is absolutely no truth to this man's assertions that Oscar, for instance, insulted the President of South Africa or boasted about our family's so-called influence." Pistorius had been at school with one of President Jacob Zuma's sons and "liked him a lot", the statement said, and he appreciated the president's support of the country's Paralympians.

While accusing Mortimer of being the aggressor, the family said that Pistorius's "being in a public space such as this, and thereby putting himself in a place where this kind of confrontation could take place, was ill-considered.

"We do however believe that Oscar is grappling with an extreme level of emotional pain that is manifesting itself in some of his recent unwise actions and choices." The family was counselling him to find ways of dealing with his feelings of isolation.

The day after the altercation, Pistorius broke five months of silence on social media websites with a series of tweets on love and pain, including a quote from the Bible.

Pistorius, 27, is accused of murdering his model girlfriend Reeva Steenkamp in the early hours of Valentine's Day in 2013.

He has told the court that he shot Steenkamp four times through a locked bathroom door in his apartment after mistaking her for an intruder. Prosecutors say he deliberately killed her after an argument.

As part of his bail conditions, he was initially ordered to abstain from alcohol consumption, but later successfully appealed for the ban to be lifted.

His trial is set to resume on August 7 for closing arguments.