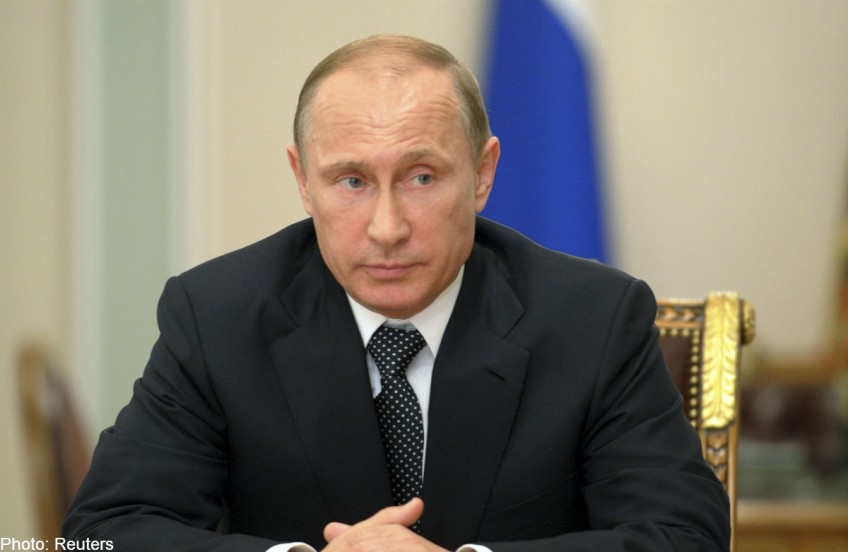 PETALING JAYA - In his 15 years at the helm of a new, capitalist Russia, President Vladimir Putin is no stranger to autocratic, if not oppressive and brutal moves to consolidate his grip on power and spread Russia's influence.

These are just ten blunders Putin has made since taking the reins from Boris Yeltsin in 1999:

1) Following his win in the 2000 Russian Presidential Elections, Putin took federal control over Chechnya, which had been pushing for independence from Moscow. This kicked off a new offensive in the Second Chechen War that saw the region's capital city, Grozny reduced to ruins. The Second Chechen war ended with a Russian victory in 2009, at the cost of an estimated 160,000 combatants and non-combatants killed.

2) In 2003, Russia's richest man, Mikhail Khodorkovsky is charged with fraud and tax evasion - and is then sentenced to jail. Khodorkovsky was charged and found guilty following a public argument he had with Putin regarding corruption among top government officials. Khodorkovsky and his business partner Platon Lebedev were subsequently charged and found guilty in December 2010 with embezzlement and money laundering, which would have extended his jail term to 2014. However, Khodorkovsky was released from prison on Dec 20 2013 when lobbying led to him being pardoned by Putin.

3) Putin introduces a 'vertical of power' by abolishing the direct election of governors, instituting a system that allows for Moscow to appoint governors in the country's 83 regions. This expansion of federal power takes place in 2005.

4) Putin and the Russian armed forces were criticised for the handling of the Beslan hostage crisis which lasted for three days, from September 1 to September 3 2004. The hostage crisis, which saw 334 of the 1,100 hostages killed during the rescue attempt by Russian forces began when terrorists of the Riyadus-Salikhin Battalion, loyal to Chechen separatist warlord Shamil Basayev entering the School Number One in Beslan, and demanding recognition of the independence of Chechnya at the UN and Russian withdrawal from Chechnya. Criticism was leveled at Putin and the Russian armed forces by Beslan survivors and relatives of the victims who focused on the use of heavy weapons such as rocket flamethrowers and tanks to break into the school and rescue the hostages, who were mainly children.

5) Putin circumvents limitations in the Russian Constitution through a game of musical chairs in the midst of the 2008 elections. He holds on to power by becoming Prime Minister of Russia, while Dmitry Medvedev takes Putin's place as President. The Russian Constitution limits an individual to two terms as President. Putin also takes over the United Russia party as its head - although he was not a member of the party.

6) At the end of Medvedev's four-year term in 2012, Putin campaigns again to be President of Russia on the nomination of Medvedev. This sparked anti-Putin protests, which were in turn met with crackdowns that saw two members of the punk rock protest group Pussy Riot being sentenced to two years in jail. The two, Nadezhda Tolokonnikova and Maria Alyokhina were jailed after performing a song in Moscow's Christ the Saviour Cathedral, an act deemed to be blasphemous by the Orthodox church, which led to them being charged and convicted for "hooliganism motivated by religious hatred." Both were released at the end of 2013 in a move widely seen as being a public relations exercise for the 2014 Sochi Winter Olympics.

7) An anti-homosexuality law is passed in 2013 forbidding "homosexual propaganda" - this prohibition also extends to rainbow flags. The passing of this legislation sparked international demonstrations and calls for sports teams to boycott the 2014 Sochi Winter Olympics. Criticisms came from such places as The Office of the United Nations High Commissioner for Human Rights which condemned the statute as discriminatory and a violation of international human rights law. Additionally the European Parliament condemned Russia for homophobic discrimination and censorship

8) In the December of the same year, Putin shuts down the RIA Novosti state news agency and launches Russia Today in its place. Russia Today is headed by pro-Kremlin journalist Dmitry Kiselev, known for his ultra-conservative views. Among those views, Kiselev has gone on record saying that gay people should be banned from giving blood, and that their hearts should be burnt rather than used in transplants.

9) The Sochi Winter Olympics themselves turn out to be a fiasco for Putin, as the Russian government spent $51 billion (RM162 bil) on an event that saw strange architectural gaffes such as multiple toilets being built in the same cubicles, and the press and athletes being housed in half-finished buildings in the Olympic villages. This culminated in the failure of an Olympic Ring to open in the closing ceremony's display and heavy criticism for Russia's management of the Games, including allegations of environmental damage and corruption.

10) The downing of Malaysia Airlines (MAS) flight MH17 has brought much international condemnation to Putin and the Kremlin's doorstep. Leaders such as Britain's Prime Minister, David Cameron and his Foreign Secretary, Philip Hammond pointing fingers at Putin for contributing directly to the Boeing 777 being shot down with a missile fired by Ukrainian, pro-Russian separatist rebels. Hammond had gone on record saying; ":The Russians have influence, if not direct control, over these people.They have been supplying, they have been supporting them, they cannot deny their responsibility for the acts these people are carrying out."