Two-year-old Brody Allen of Greater Cincinatti and Northern Kentucky in the United States was diagnosed with a rare brain and spine cancer early this 2018, a reality his family had to face head-on.

"Up until May 5 of this year, he was a very normal, active little boy. When he developed some dizzyness we took him to the doctor. We got the news no parent can ever be prepared for. Our son has Brain Cancer," wrote the Allen family in their Go Fund Me page for Brody back in June.

As per their page, Brody has been confined in the Cincinnati Children's Hospital Medical Center since his diagnosis and was to remain there for the next seven months.

Brody spent 98 days in the hospital where he received the most aggressive treatment to fight his four tumours: three in the brain and one in the spinal cord. Despite medical intervention, however, Brody's family discovered that the treatments were not taking any effect. 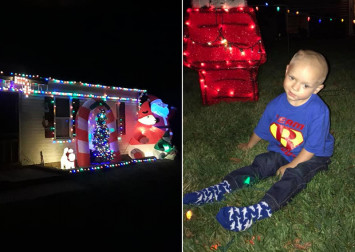 After being given a prediction that Brody only had two months left to live, his family decided instead to make the very best of his short time remaining.

This compelled the Allen family to put up a Team Brody Facebook group, whose membership grew to as many as 19,000 people from the world over to join Brody in his journey.

Their little community in Colerain, Township, Ohio also made sure to give Brody the best Christmas ever.

After being told by doctors that he won't make it to Dec. 25, family friends and neighbours joined Team Brody to decorate their homes with Christmas lights as early as September.

As per the WCPO last Sept. 13, many people in the community supported the Allen family and threw a Christmas parade later that month, just for Brody.

The parade was nothing short of festive, featuring a fireworks show, complete with all the Christmas regalia, music, lights, trees, and even snow.

"It made his day. It made everybody's day," Todd Allen, Brody's father, told WCPO on Sept. 23. "We're grateful to everyone for coming out and giving our family a huge hug."

It was on Oct. 19, a Friday, when Todd took to the Team Brody Facebook group to personally tell all their supporters that Brody had passed - quietly, peacefully, and in the arms of his mother.

"Good morning. It is with the deepest sadness I want to tell you that Brody has lost his fight. This morning at 6 am Brody passed quietly, and peacefully in the arms of his mother Shilo," wrote Todd, sharing a picture of Shilo, Brody's mom, giving her son a kiss.

"He did not suffer. He was surrounded by his family and I have no doubt many angels. While our sadness is immeasurable and we will miss his smiling beautiful soul, we are also comforted in knowing that today our son has touched the face of God."

An outpouring of prayers and condolences came in the wake of Brody's passing, with thousands of people taking to the comments section to bid the little Brody goodbye. Others gave words of comfort to the Allen family and shared their own stories of grief and loss.

"Today heaven welcomed home our little superhero," Todd continued to say. "Fly high little man.. Until we see you again. We love you."