2-year-old defies the odds, learns to walk despite spine condition

One 2-year-old has inspired thousands of people all over the world for overcoming the odds. Roman Dinkel from Huntsville, Missouri was diagnosed with spina bifida, a birth defect where the baby's spine and spinal cord don't develop or close properly inside the mother's womb, thus causing a gap in the spine.

Roman was discovered to have spina bifida during his 20-week ultrasound as per CBS News in Aug. 8. 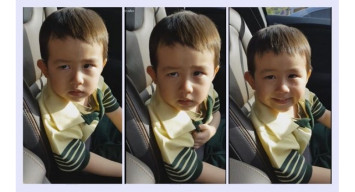 Roman, however, has come far. A Facebook page called "Defying Odds: Roman's Journey" documents Roman and his little triumphs, such as being able to walk by himself. The page is managed by his mother Whitney who regularly shares pictures and video clips of Roman walking around on his own with the help of his crutches.

In a 7-second video clip shared last Aug. 1, Roman can be seen walking down the hall of their home. As he inched along with his crutches, he told their black poodle, "Look, Maggie! I'm walking, Maggie!'

You think he’s proud of himself? “Look Maggie, I walking Maggie!” (for usage and licensing contact licensing@viralhog.com)

The clip has since gone viral, amassing 23 million views and 260,000 thousand likes in less than 10 days.

On Aug. 8, the page also shared a throwback video of Roman walking for the first time with his walker back in 2017.

"I share this one year ago today," wrote the Facebook page. "This was the first day Roman got his walker. He shocked us all when he actually started walking in it!"

No one ever wants to hear that your baby isn't "perfect", but unfortunately so many of us have to deal with a scary...

Roman and his family were met with an outpouring of support from people the world over. After receiving many messages from people who want to help Roman, parents Whitney and Adam created a GoFundMe page in Roman's name.

"This money will go towards extra medical expenses, medical equipment, and to [Roman's] personal bank account," they wrote. " We would also like to donate a portion of the proceeds to Spina Bifida of greater Kansas City."