The trio, all Australian nationals of Turkish descent, were nabbed in overnight raids as they escalated preparations to attack crowded areas of Melbourne, according to police.

The men were "certainly inspired by ISIS", the Islamic State in Iraq and Syria (ISIS) militant group, but had no known links to a specific organisation, Chief Commissioner Graham Ashton said.

"We're very confident that our actions taken early this morning have neutralised any threat to the... community from this group." he said. "We don't believe there's any extended threat outside of the group." The three, who were not named, had been under investigation since March but had become "more energised" since the ISIS-inspired stabbing attack in Melbourne on Nov 9, he said. 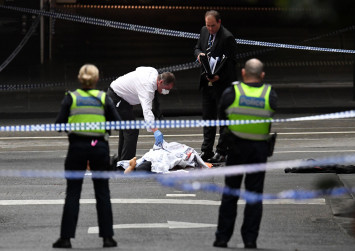 In that attack, a Somali-born Australian, Hassan Khalif Shire Ali, stabbed and killed one man and wounded two others in a central shopping area before being shot dead by police.

Tuesday's arrests coincided with a state funeral for the victim of that attack: Sisto Malaspina, 74, the owner of a local Italian cafe and a popular figure in Melbourne's vibrant restaurant scene.

The three arrested men were aged 30, 26 and 21, and will be charged in a Melbourne court later in the day with terrorism-related offences that carry a potential penalty of life in prison, police said.

They had no previous criminal records, but had all had their passports cancelled earlier this year to prevent them from joining terror groups overseas, police said.

"If we had not acted early in preventing this attack, we'll allege the consequences would have been chilling, with... a potential significant loss of human life," said Ian Mccartney, a federal counter-terror police spokesman.

Mccartney said the trio had attempted to acquire semi-automatic .22 calibre rifles for the attacks, but had not yet chosen specific targets, he said.

Australian police have charged 90 people in relation to 40 counter-terrorism investigations since 2014.

They said the probe into the three men arrested on Tuesday had been complicated by their use of encrypted messaging applications, an element certain to fuel debate about government attempts to force device makers and telecom companies to grant access to the applications.