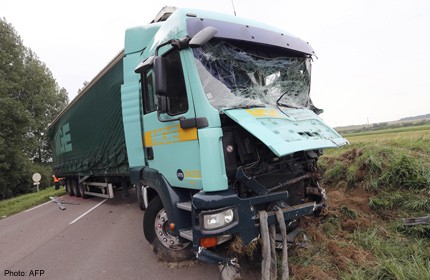 The wreck of a truck is seen across the road at the accident site after it crashed with a minibus near Courteranges, outside Troyes, on July 22, 2014.

LILLE, France - Five children aged 12 to 14 and their driver were killed when the minibus they were travelling in crashed headlong into an incoming truck, a local prosecutor said Wednesday, revising an earlier toll.

Perrin had previously said that four children were killed, as was the driver and another 20-year-old man, but he told AFP he had got the latter victim's age wrong.

The children were returning home from a trip to the Lac d'Orient, a huge artificial lake, when the minibus they were in suddenly veered to the left on a country road and crashed into a truck coming the other way.

Three other passengers -- two children and an adult accompanying them -- were injured but are not in critical condition, and the driver of the truck escaped largely unhurt.

"Was it a moment of inattention, was there some commotion inside the vehicle? We don't know," Perrin told reporters late on Tuesday.

He said a probe into the accident would seek to determine the exact cause of the crash, adding that the road was well maintained, and visibility and the weather at the time were good.

The accident is one of the most serious involving children since 1982, when 53 people -- including 44 children -- died when their bus caught fire after it collided with several vehicles on a motorway.