Attention all '90s kids: Tamagotchi is about to make a comeback.

However, it's only slated for a US re-release for the time being.

It will reportedly be released in "limited quantities" on November 5, to mark the tiny toy's 20th anniversary, according to Bandai America.

As a matter of fact, it was already launched in Japan in April this year for the same reason.

The new release will come in the form of mini Tamagotchi devices and will have six shell designs as well as six characters each. It is set to retail at US$15 (S$20.40) each.

Read Also
Tamagotchis make a comeback: 5 other toys from the late 1980s and 90s 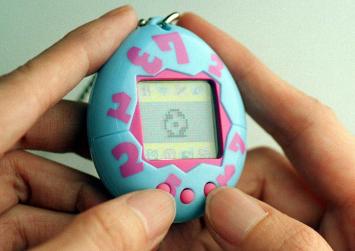 While we wait our turn in Singapore, here are five fast facts to know about the toy fad that rocked an entire generation of kids:

1. Over 82 million Tamagotchi toys have been sold worldwide since its introduction

The Tamagotchi - which loosely translates to 'Egg Watch' in Japanese - made its official debut in 1996 in Japan.

It was later rolled out to the rest of the world in 1997, and the rest, as they say, is history.

More than 76 million Tamagotchis have reportedly been sold worldwide. To put it into perspective: That's more than the entire UK population.

2. A Tamagotchi pet could die in less than half a day

You know what that means - kids were caught bringing their beloved virtual pets to school because the earlier Tamagotchi versions required constant love and attention.

After all, they had to be fed and, well, cleaned up. The creatures would famously leave "droppings" all over the screen whenever nature called.

If the owner failed to clean up quick enough, the pet could fall sick.

3. At each stage of its life, the Tamagotchi becomes a different character

There are multiple stages in a Tamagotchi's life cycle - including the ominous stage of Death.

It starts from the egg stage, of course, where players wouldn't be able to do much.

4. All Tamagotchis come from Planet Tama

It also happens to be the closest planet to our very own planet Earth. How convenient!

Did you know? An image of Planet Tama is used as the Death screen on the English edition of the Tamagotchi mini.

5. Your Tamagotchis can build their own families

You read that right. Your Tamagotchi could marry a friend's Tamagotchi and have kids of their own. This is possible in the newer versions of the toy.

What's even cooler is that when Tamagotchis get hitched, the female pet will produce two eggs - each cared for by the mum and dad Tamagotchi respectively. Talk about fair marital roles!