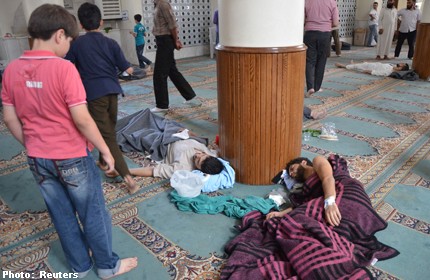 A boy looks at survivors from what activists say is a gas attack resting inside a mosque in the Duma neighbourhood of Damascu.

DAMASCUS - More than 650 people were killed in fierce Syrian army bombardment with chemical weapons of Damascus suburbs on Wednesday, the opposition said, branding it a "massacre" and calling for international intervention.

Britain, meanwhile, said it would refer the alleged chemical weapons attack, which could not immediately be verified and has been vehemently denied by the Damascus regime, to the United Nations.

While the Syrian National Coalition gave a toll of 650 dead, a Britain-based monitoring group said earlier that at least 100 people had been killed and the number was rising.

"This figure will surely go up. The raids and bombardment are continuing," said the Syrian Observatory for Human Rights, which gathers its information from activists and medics.

It did not comment on allegations by anti-regime activists that the army had used chemical arms in its bombardment of the densely-populated Ghouta suburbs where rebels have been holding out against government forces.

According to activists, hundreds of people died of gas inhalation and exposure to chemical weapons.

Syrian authorities, for their part, denied charges that the army used chemical arms.

"Reports on the use of chemical weapons in (the suburbs of) Ghouta are totally false," state news agency SANA said. "It's an attempt to prevent the UN commission of inquiry from carrying out its mission."

Al-Watan newspaper said the Syrian government had "pledged to cooperate and facilitate the work" of a UN team of chemical inspectors who launched a mission in the country on Tuesday.

"I call on the Security Council to convene urgently," National Coalition leader Ahmed al-Jarba told Al-Arabiya news channel, condemning the bombardment of the suburbs as a massacre.

He was "deeply concerned" by the reports and said if they were proved they would mark a "shocking escalation".

The Local Coordination Committees (LCC), a network of activists reported hundreds of casualties in the "brutal use of toxic gas by the criminal regime in parts of Western Ghouta".

And in videos posted on YouTube, the Syrian Revolution General Commission, another activist group, showed what it called "a terrible massacre committed by regime forces with toxic gas, leaving dozens of martyrs and wounded."

The attack "led to suffocation of the children and overcrowding field hospitals with hundreds of casualties amid extreme shortage of medical supplies to rescue the victims, particularly Atropine," the LCC said.

Eastern Ghouta "was also shelled by warplanes following the chemical attack that is still ongoing which led to hundreds of casualties and victims, among them entire families," it said.

In one video, children are seen being given first aid in a field hospital, notably oxygen to help them breathe. Doctors appear to be trying to resuscitate unconscious children who show no signs of bleeding.

The authenticity of the videos could not immediately be verified.

The Observatory said "regime forces ... stepped up military operations in the Eastern Ghouta and Western Ghouta zones of the Damascus region with aircraft and rocket launchers."

The heavy bombing on the outskirts of the capital could be heard by residents of Damascus, where a grey cloud capped the sky.

The Britain-based Observatory, which relies on a vast network of activists on the ground and medics, said the army operation was aimed at the recapture of Madhamiyat el-Sham, an area southwest of Damascus.

The Syrian Observatory called for inspectors to hastily visit the stricken sites and ensure access for medical aid.

UN chief Ban Ki-moon insisted Monday that the inspectors be granted unrestricted access to Syrian sites where chemical weapons have allegedly been used in the country's 29-month-old conflict.

The inspectors, expected to visit three sites including Khan al-Assal near Aleppo in the north, are due to be in Syria for 14 days, with the possibility for an extension of the mission.

"In order to credibly establish the facts, the mission must have full access to the sites of the alleged incidents," the secretary general told reporters.

The Arab League, meanwhile, urged the inspectors now inside Syria to immediately visit the site "to see the reality of the situation and investigate the circumstances of this crime