9 foreigners among those injured in Melbourne car attack

MELBOURNE - A man who mowed down pedestrians with his car in Melbourne attributed his actions to "perceived mistreatment of Muslims", Australia said on Friday (Dec 22), with nine foreigners among the injured.

Nineteen people were rushed to hospital, and three remain critical, after the Australian-Afghan driver ploughed through a busy downtown intersection on Thursday in what authorities said was a "deliberate act".

The 32-year-old, who came to Australia as a refugee, has a history of drug abuse and mental problems and Prime Minister Malcolm Turnbull reiterated there were no links to terrorism "at this stage". 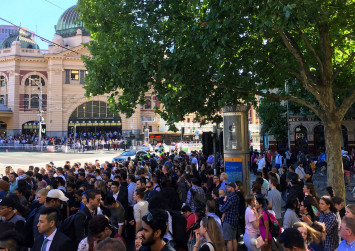 "To be attacked like this, in the middle of one of our great cities, is a shocking event, a shocking crime," Turnbull said.

"He has said, in a number of what the police are describing as utterings, that he attributed his actions to perceived mistreatment of Muslims.

"But at this stage, because investigations are continuing, apart from that statement, there are no known links to any political issues, or any links to extremist groups, and I am advised at the moment that no terrorism link has been identified."

The man, who was wrestled from the car by an off-duty police officer, was due to undergo a psychiatric assessment later Friday.

Turnbull said nine foreign nationals were among those hurt, including three South Korean tourists, according to the country's Yonhap news agency.

Melbourne's Herald Sun said the other victims came from China, Italy, India, Venezuela, Ireland, and New Zealand, with the city full of tourists for the festive season.

Turnbull assured Australians Thursday's carnage was an isolated incident and "we should continue to go about our daily lives in the way we always do".

Melbourne began returning to normal on Friday, with roads re-opened.

But there was a boosted armed police presence, with a major carols by candlelight event scheduled for Christmas Eve and the Boxing Day cricket Test between Australia and England taking place nearby.

Thursday's incident came after a car rammed into pedestrians in Melbourne's busiest mall in January, killing six people. The driver, whose case is still being heard in court, was a drug addict and had allegedly just stabbed his brother.

Canberra has become increasingly worried about homegrown extremism and officials say they have prevented 13 terror attacks on home soil in the past few years.

The government in August unveiled a strategy aimed at preventing vehicle attacks in crowded public places.

Suggested steps include deterrent options like fencing and closed circuit cameras, and delaying approaches such as trees and bollards to slow down vehicles.

Melbourne has also been installing a public siren system and more security cameras to warn people of a possible terrorist attack or other serious threats.