Agnes Scott College student Jordan Simi (C) participates in a chant during a pro-abortion rights march and rally held in reaction to the leak of a draft US Supreme Court majority opinion written by Justice Samuel Alito preparing for a majority of the court to overturn the landmark Roe v. Wade abortion rights decision later this year, in Atlanta, Georgia, US, on May 3, 2022

With its excellent academic and music programs, Oberlin College in Ohio seemed like a perfect fit for Nina Huang, a California high school student who plays flute and piano and hopes to eventually study medicine or law.

But Huang, 16, said she crossed the college off her application list after Ohio enacted a near-total ban on abortion last month. She now plans to cast a wider net for schools in states with less restrictive laws.

"I don't want to go to school in a state where there is an abortion ban," she said.

The US Supreme Court's decision in June to overturn the 1973 Roe v. Wade case that legalized abortion nationwide has some students rethinking their higher education plans as states rush to ban or curtail abortion, according to interviews with 20 students and college advisers across the country.

While it has long been the case that some students hesitated to attend schools in places with different political leanings than their own, recent moves by conservative states on issues such as abortion and LGBTQ+ rights have deepened the country's polarisation.

For some students, the restrictions raise fears that they won't be able to get an abortion if they need one or that they will face discrimination for gender differences. Others said they worried about facing racial prejudice or being politically ostracised.

"I'm only in high school right now, and I'm still finding out who I am," said Samira Murad, 17, who will be a senior this fall at Stuyvesant High School in New York. "I don't want to move somewhere I can't be myself because of laws put in place."

It is too soon to determine whether such concerns will affect admissions in a measurable way, and evidence from other recent divisive state laws suggests there may be a little overall impact.

But in the wake of Roe's overturn, college counsellors said abortion has figured prominently in many conversations with clients, with some going as far as nixing their dream schools.

"Some of our students have explicitly stated that they will not apply to colleges and universities in states which may infringe on their access to reproductive rights," said Daniel Santos, chief executive of the Florida college counselling company Prepory.

Kristen Willmott, a counsellor with Top Tier Admissions in Massachusetts, said students she works with have told her they are taking some top schools in Texas, Florida and Tennessee off their application lists due to their restrictive abortion laws.

Alexis Prisco, who is entering her senior year at Eastern Technical High School in Maryland, had planned to apply to her parent's alma mater, Washington University in St. Louis, Missouri.

She feels wary, however, after the state enacted a law effectively banning abortion.

"Now my mom has warned me that I need to be very careful when applying to schools in states with trigger laws," said Prisco, 17, referring to bans designed to take effect once the Supreme Court overturned Roe. 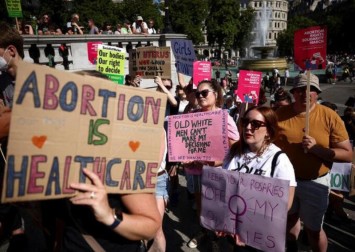 Washington University declined to comment but shared a June 24 statement in which university leaders acknowledged the fears and frustration felt by some after the court ruling. Oberlin College did not respond to requests for comment.

But he said many still chose to attend Duke University and the University of North Carolina at Chapel Hill.

Admissions statistics from UNC show the number of applicants increased by 14per cent between 2016 and 2017 despite individual students' unease.

Abortion is "a topic of concern for most of the students but not something that's going to dissuade them from going to one of the most highly selective schools in the country," Weingarten said.

Shahreen Abedin, a spokesperson for the University of Texas' medical school, said the school had not seen a drop in applications that it could reasonably attribute to a state ban on abortions after six weeks that took effect in September.

For Maryland high school student Sabrina Thaler, however, the prospect of attending college in a state that bans abortion is unsettling.

Thaler, 16, recalled the question she posed to her high school class during a discussion in May after the decision that ultimately overturned Roe v. Wade was leaked.

"What if I go to a college in a state where abortion is banned and I get raped and then I don't have the option to have an abortion?"