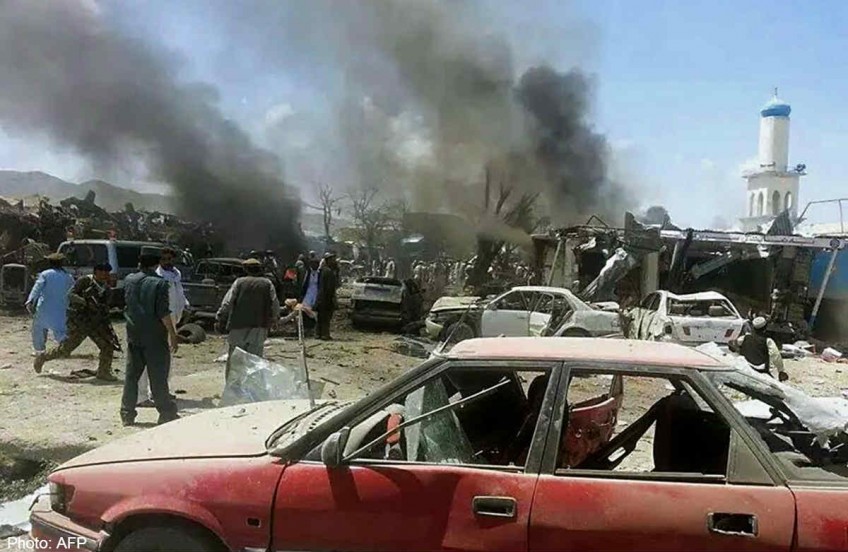 Afghan security personnel are pictured past mangled cars at the scene of a suicide attack at a busy market in Urgun district, Paktika province on July 15, 2014.

KABUL- Afghan officials Wednesday began investigating a devastating suicide bombing at a busy market that killed at least 42 people, one of the deadliest attacks in the wartorn country in recent years.

A bomber drove a truck loaded with explosives into the market in Urgun district of southeastern Paktika province as it thronged with shoppers on Tuesday morning.

Nabi Jan Mullahkhil, the police chief in Paktika, said the investigation into the blast was under way.

"Our teams are on the ground to find out how this car had entered Urgun, whether any facilitators were involved," he said.

"The death toll is still 42 killed including women and children and around 60 wounded." The Afghan defence ministry issued a statement on Wednesday to correct a death toll of 89 that an official had previously given on Tuesday.

"We are sending this correction today, because due to the rush, wrong figures were given to media yesterday," the statement said.

"Based on the latest information, 42 were martyred and 67 wounded in yesterday's attack in Urgun." Numerous other sources, including the office of President Hamid Karzai, on Tuesday put the death toll between 41 and 43.

The attack, the deadliest single blast in Afghanistan since a suicide bomber killed 42 people at a mosque in the northern province of Faryab in October 2012, was quickly condemned by the international community.

There was no immediate claim of responsibility and the Taliban denied they were behind the blast in a tweet from a recognised account. They regularly deny attacks that kill civilians.

Paktika borders Pakistan's tribal areas including North Waziristan, where the Pakistani military are in the midst of a major offensive against militants.

Hundreds of fighters are thought to have fled across the border into Afghanistan.

As part of their annual spring offensive, the Taliban have increased attacks on foreign and Afghan security forces, but it is usually civilians who suffer the brunt of the casualties.

A UN report last week said civilian casualties in Afghanistan soared by 24 per cent to 4,853 in the first half of 2014 compared to the same period in 2013.

The grim figures underline the fragile security situation Afghanistan faces as it wrestles with political turmoil over its disputed presidential election, with most foreign forces due to withdraw by the end of the year.

The two candidates vying to take over from Karzai, Abdullah Abdullah and Ashraf Ghani, reached a deal late Saturday to audit all eight million ballots cast in their runoff election following two days of frantic diplomacy by US Secretary of State John Kerry.