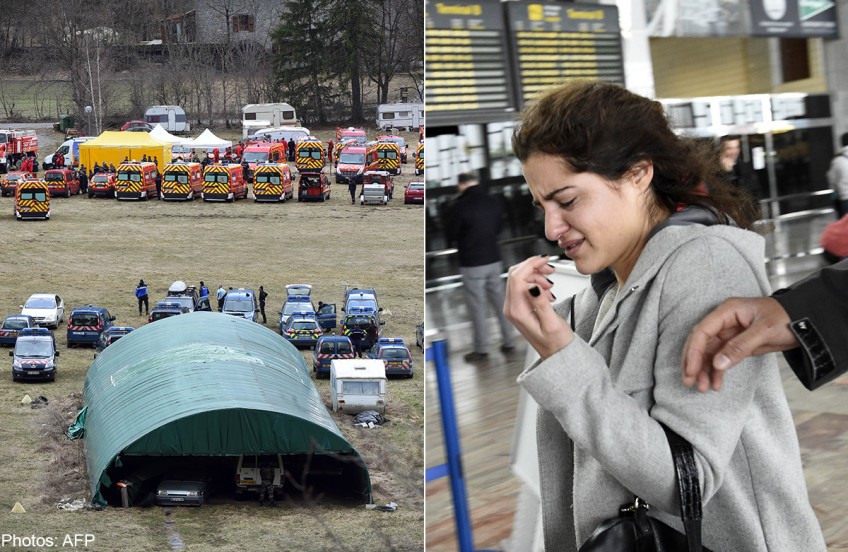 A German-owned Airbus A320 plane that crashed in the French Alps on March 24, 2015 had 148 people onboard including six crew members, a civil aviation official said.

Sixteen German school children were feared dead in the crash of a passenger jet over the French Alps on Tuesday, the mayor of a Spanish town that hosted them as exchange students said.

"There were 16 children and two teachers who had spent a week here. The children were aged about 15" and left to catch the flight on Tuesday morning, Marti Pujol, mayor of the village of Llinars de Valles near Barcelona, told AFP.

UPDATE (8.45PM): Spain's Deputy Prime Minister Soraya Saenz de Santamaria, who is in charge of the crisis cabinet, said there were 45 people with Spanish-sounding surnames on board the plane which was travelling to the German city of Dusseldorf.

It was not immediately clear how many of them were Spanish citizens. Transport Minister Ana Pastor was heading to the southern French city of Marseille to be near the area of the crash in the ski resort area of Barcelonnette.

UPDATE (7.40PM): French President Francois Hollande said it was likely all passengers and crew on the Airbus A320 had perished in the crash. "There are not thought to be any survivors," the president told reporters after the disaster.

The plane was travelling from the Spanish coastal city of Barcelona to the German city of Duesseldorf when it went down in the Barcelonnette area, in southeeastern France. The plane issued a distress call at 10:47 am (0947 GMT), sources said.

The airliner was carrying 142 passengers and six crew members. The plane belonged to Germanwings, a low-cost affiliate of German airline Lufthansa. The single-aisle A320 typically seats 150 to 180 people.

Interior Minister Bernard Cazeneuve, who said debris from the plane had already been found, was heading to the scene. Shares in Airbus, the European aerospace giant, slumped on news of the accident, down 1.77 per cent to 58.94 euros at 1100 GMT after briefly sliding two per cent.

French Prime Minister Manuel Valls said he understood between 142 and 150 people were on board and feared dead.

"The cause is at present unknown," he told reporters.

A spokesman for the DGAC aviation authority said the airplane crashed near the town of Barcelonnette about 100 km (65 miles) north of the French Riviera city of Nice. Lufthansa's Germanwings unit said it was as yet unable to verify reports of the crash.

However, Lufthansa did not have any information following reports of a plane crash in France and said it could not confirm that an incident had occurred, a Lufthansa spokesman said.

Germanwings said on its Twitter feed that it would inform media on its website as soon as it had more information.