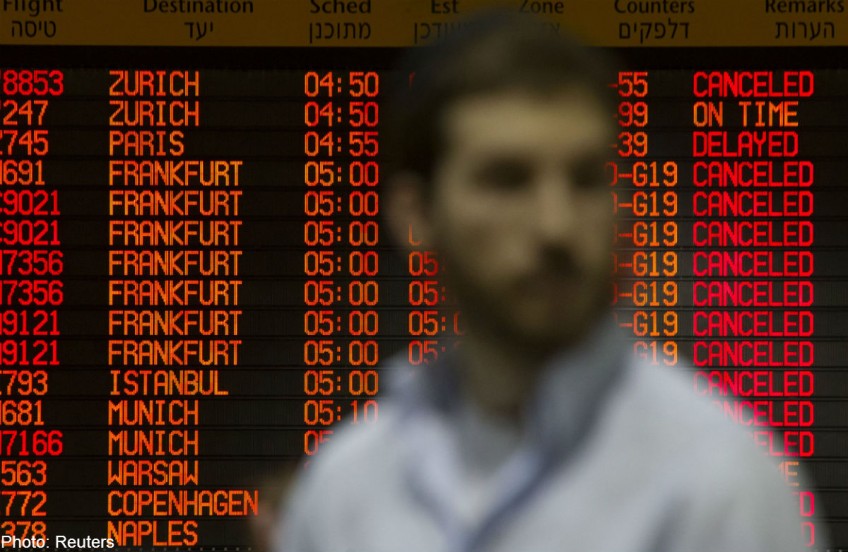 A departure time flight board displays various cancellations as a passenger looks on at Ben Gurion International airport in Tel Aviv July 22, 2014.

WASHINGTON - Major US, European and Canadian airlines cancelled flights to and from Israel Tuesday, after a rocket fired from Gaza struck near its main international airport in Tel Aviv.

The cancelations highlighted heightened worldwide fears of a rocket hitting a passenger jet in the wake of last week's downing of a Malaysia Airlines Boeing 777 over rebel-held eastern Ukraine with nearly 300 on board.

That incident underscored the vulnerability of commercial aircraft to surface-to-air missiles, even at cruising altitudes in excess of 30,000 feet.

In the United States, the Federal Aviation Administration (FAA) banned US airlines from Tel Aviv for at least 24 hours, citing the "potentially hazardous situation created by the armed conflict in Israel and Gaza." "All flight operations to/from Ben Gurion International Airport by US operators are prohibited until further advised," the FAA said, adding it would update its guidelines on Wednesday.

Delta, US Airways and United Airlines heeded the FAA order, with Delta diverting a Tel Aviv-bound Boeing 747 with 273 passengers and 17 crew on board to Paris.

London-based easyJet announced that it too would suspend service to and from Tel Aviv for 24 hours, and said in a statement that beyond that, it would "review its operations to and from Israel on a day by day basis." The company said the suspension of the flights was meant to protect "the safety and security of easyJet's passengers and crew.

Likewise, Greece's Aegean Airlines wrote on its Twitter account that as of 0400 GMT Wednesday, it would suspend flights between Athens and Tel Aviv.

Prompting the rush of cancellations was a rocket fired from Gaza which, according to Israeli police, struck north of the airport. One house was damaged in the Kiryat Ono Yehud region, police spokeswoman Luba Samri told AFP.

Israel tried to stem the damage, with its transport ministry Yisrael Katz calling American carriers to assure them there was "no security problem" for take-offs and landings at Ben Gurion, a civil aviation authority spokesman said.

"There is no reason for American companies to cancel their flights and yield to terrorism," Katz was quoted as saying. Israeli flag carrier El Al said it would continue its service without interruption.

Deputy State Department spokeswoman Marie Harf nevertheless said it was likely that the FAA flight ban could be extended.

In Europe, Air France said it was canceling its Tel Aviv flights "until further notice." Lufthansa said it was doing the same for three days. KLM suspended its services, citing "security reasons." Lufthansa explained that its decision was made "for the security of passengers and crew" amid the "unstable situation" near the airport.

In Italy, Alitalia cancelled its Tel Aviv flights Tuesday and rescheduled its Wednesday morning service to the evening. Spain's Iberia said it would re-evaluate the situation Wednesday after canceling its evening flight.

In Toronto, Air Canada cancelled its service to and from Tel Aviv on Tuesday, adding on Twitter it would "continue to evaluate going forward and update." British Airways, however, maintained their flights.

"We continue to operate as normal," a British Airways spokesman said. "Safety and security are our highest priorities and we continue to monitor the situation closely."

Delta said it had diverted its Tel Aviv-bound flight after "reports of a rocket or associated debris" near Ben Gurion airport.

"Delta, in coordination with the US Federal Aviation Administration, is doing so to ensure the safety and security of our customers and employees," it said in a statement.

US Airways meanwhile told AFP in a Twitter exchange it had cancelled its flights Tuesday between Philadelphia and Tel Aviv "in response to security concerns" at the airport in Tel Aviv.

And United said: "We're suspending operations to/from Tel Aviv until further notice. We'll continue to evaluate the situation." United was more discreet on its website, where it said its two flights Tuesday to Tel Aviv from Newark airport outside New York had been "cancelled due to aircraft availability." Delta, which links Tel Aviv with New York's John F. Kennedy International Airport, said it was "working to reaccommodate" passengers on its Paris-diverted flight.