W.T.M. Why This Matters
Among threatened whale species, the conservation of the bowhead is of the "least concern" in Alaska. While whaling is allowed to some extent, US government is concerned about protecting extremely vulnerable marine species. It is now awarding US$5.8 million (S$7.9 million) in grants to states and tribes to promote the recovery of endangered and threatened marine species such as beluga whales, Atlantic salmon, white abalone, and Southern resident killer whales.

An Alaskan teen was lauded for his hunting prowess in catching a gigantic 200-year-old whale to feed his entire village, but is now traumatised after getting death threats for killing it.

When Chris Agra Apassingok, 16, harpooned the 17-metre bowhead whale in April, his family and neighbours on remote St Lawrence island celebrated the occasion as his rite of passage.

Proud of his achievement, his family shared photos on social media of the mammoth carcass being sliced up for distribution to the tiny village where subsistence hunting on land and sea keeps them alive.

His story first ran on KNOM Radio Mission before it was picked up by Alaska Dispatch News.

Then it went viral, with positive responses shared hundreds of times mainly by Alaskans who praised Chris for his feat, and then by people outside the state, where it raised the ire of anti-whaling groups around America. PAUL WATSON OF SEA SHEPHERD ACCUSED OF ENCOURAGING BULLYING Although the bowhead whale is not an endangered species in Alaska today, many of these groups' supporters have slammed Chris, with some sending degrading memes and hate messages to his Facebook account.

"He's just a kid," implored his mother, Susan Aakapak Apassingok, who had started a GoFundMe crowdfunding account in May to raise money to take legal action.

"He does not deserve this type of treatment for providing for his family, his community, those that cannot provide for themselves," she wrote on the page.

It's not certain what kind of legal action could be taken against the perpetrators of online harassment.

But one individual, Paul Watson, was named on the GoFundMe page.

Watson is a controversial environmental activist who formed the Sea Shepherd Conservation Society best known for disrupting Japan's annual whale hunt and the promotion of veganism.

In an April 28 post on Facebook, he wrote: "My post from a couple of days ago on this page deploring the killing of a 200-year-old bowhead whale by some 16-year-old, who was joyfully boasting of his snuffing the life from such a majestic creature, seems to have ruffled some feathers. Some are calling me racist. Others are demanding an apology. There will be no apology. Not now, not ever." 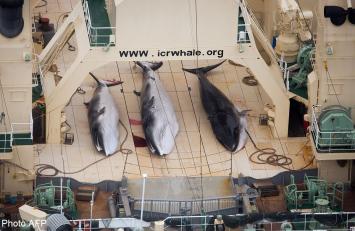 Whaling communities, which have been killing whales for food, energy and many other things in their life, were alarmed and hurt by Watson's remarks and his encouragement of online bashing of the teen.

Kawahine Danner, a college student from Utqiagvik, wrote in a post: "As the granddaughter of an Inupiaq whaling captain, I try to prevent my bias from overshadowing what's going on here. I'm all for exchanging beliefs, but cyberbullying a minor who was trying to feed his village is just blatant cruelty. We need to band together and educate our peers about subsistence and bullies. We will persist."

Watson, who claimed to have received death threats too for his stand, yesterday strongly denied he had encouraged the bullying of Chris.

In his latest post on August 14, he said: "It was not a public statement but my critics decided to make it public and to embellish it with false accusations that I encouraged people to bully the kid. I did not. What I did was to post my anger at the murder of this whale on my private non-public page. I view the killing of whales and dolphins as murder. " WHALING COMMUNITIES APPEAL FOR UNDERSTANDING In the clash of cultures or preferences, one man's meat is another's poison.

Said Tatiana Ticknor, a teenager of Anchorage: "When I see this happen it makes me feel sad and angry. Yet it makes me think on how uneducated people are on our First Nations peoples.

"We are a culture still living and breathing today. What Chris did was an amazing accomplishment to him and his community."

Susan had told KNOM: "My son has been hunting since he was in diapers and drinking from the bottle, he's been whaling. His life has been nothing but hunting."

Meanwhile, Chris continues to receive words of encouragement from supporters on his Facebook page.

Kim Feller wrote yesterday: "Keep up the great work, providing for your family and village. You are helping to take care of many and will be blessed because of that. Do not let those who talk negatively to bring you down! You have nothing to be ashamed of." Chris' mother, Susan Aakapak Apassingok, explains in GoFundMe why her community depends on hunting for survival in a such a remote place with harsh conditions.Photo: GoFundMe/Susan Aakapak Apatiki
#Whaling #Whales