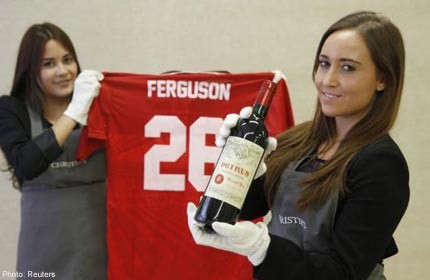 LONDON - To take his mind off the pressure of "the beautiful game", retired Manchester United boss Alex Ferguson collected vintage wines that will be sold at auction starting in Hong Kong in May, Christie's said on Wednesday.

The collection of about 5,000 bottles assembled by one of soccer's most successful managers will be sold along with memorabilia signed by Ferguson and has a pre-sale estimated value of 3 million pounds ($5 million), the auction house said.

The cellar consists almost 75 percent of Domaine de la Romanee-Conti, a French Burgundy which Christie's International Director of Wine David Elswood said "is probably the wine in vogue, the wine of the moment in terms of demand.

"So hopefully that's going to draw the attention of not just Alex Ferguson fans but wine fans too," he told Reuters.

He expects big interest among Asian buyers, who have been snapping up top-flight wines for years and where about 60 percent of the lots will be on offer on May 24. About a third of the cellar will be offered in London in June and about 10 percent through Internet sales later that month.

"Even if you disregard the Alex Ferguson connection the quality of the wine, the type of wine, is generally what sells very strongly in Asia at the moment," Elswood said.

The cellar spans every year of Ferguson's career with United from 1986 until he retired in 2013. It includes lots from 1999, the year United won a treble of the English Premier League, the Champions League and the FA Cup, a feat never previously accomplished and not duplicated since.

"People keep saying, 'What was the best moment of your life as a manager?' and '99 is without question," Ferguson is quoted as saying in an interview with Elswood to promote the sale.

"There was always this thing about my career that I never had won the Champions League, so to win it in the way we did win it was absolutely fantastically special. And it coincided with a vintage; you were talking about Romanee-Conti '99, a really special year. I think we deserved that," Ferguson is quoted as saying in the conversation with Elswood.

Christie's said Ferguson had declined to be interviewed directly about the auction, but he also told Elswood that he took up wine collecting in 1991 during a visit to France and it developed into a way to relieve the stress of his job.

"Taking an interest in wine allowed me to have an interest outside the game. You have to have outside interests to distract you from the intensity and the pressure you come under as a football manager.

"And all of a sudden, two or three years ago, when I'm going through the portfolio, we realise this has got to be an amazing amount of wine. I retired last year, and I thought this was a good time to, to sell it," Ferguson added.

He says it became a ritual to treat visiting managers to a glass of his finest, and to accept gift bottles in return.

"Even though the rivalries are intense, you have to find that moment where you can say, 'Look, the game's a game - let's carry on with our lives,'" Ferguson said.