He is the developer of Angry Birds, a game that was downloaded more than 4 billion times, became a feature-length animated movie and broke new ground for mobile gaming more than a decade ago.

Now, Peter Vesterbacka is hoping to break ground of an entirely different sort. Armed with US$17 billion in Chinese money, the Finnish entrepreneur wants to build a tunnel from Finland to Estonia, in what would be one of modern Europe’s major infrastructure projects.

Talking from his office in Helsinki, Finland’s capital, the gaming mogul describes the inspiration he has drawn from Japan’s Shinkansen bullet trains and China’s high-speed rail network.

It is natural, he tells the South China Morning Post, for his project to partner with China Railway Group and to take financing from Touchstone Capital Partners for the 100km (62-mile) project. “I think it’s pretty obvious where you should look for the technology if you want to be able to do fast rail,” he said.

Linking Helsinki and Estonia’s capital Tallinn, separated by the Gulf of Finland, has long been discussed by the countries’ governments. The tunnel would cut the journey to 20 minutes, compared with two hours by ferry.

But the project has run into political blockages that even Vesterbacka may struggle to engineer a way around. At one end of the proposed tunnel, in Estonia, political opposition to China is rising fast, and it is percolating through the other Baltic nations of Latvia and Lithuania.

The tiny trio are at the vanguard of China scepticism in Europe, to the extent that it was no surprise to see their names among a group of 14 nations issuing a joint statement this week calling for an “independent analysis and evaluation, free from interference and undue influence, of the origins of the Covid-19 pandemic”.

Vesterbacka is confident that the scepticism is surmountable and that his trains will be running by December 24, 2024. He dismisses the aversion to Chinese capital as “intellectually lazy”, given that majority ownership will be retained in Europe.

“There is this cold war between the US and China. And I think the EU is caught in between. Of course, we shouldn’t be naive about this; every nation including Finland, Estonia, Germany, China, the US, has its best interests in mind,” he said.

“But what is the worst thing that could happen? [The Chinese] close the tunnel – or they take it away? How is this worse than what we have, which is no tunnel at all?”

Others are not so sure. Sentiment on China has swayed so far in recent months that there is “no way in hell this project will get approved” in Helsinki, Tallinn and Brussels, which all need to sign off on it, said Una Berzina-Cerenkova, director of the China Studies Centre at Riga Stradins University in Latvia.

A spokesperson for the Estonian intelligence agency pointed to irregularities in Touchstone’s financial history and warned that China “uses these investments as a lever for steering other countries’ policies in a suitable direction”.

“Understandably, this raises concerns about the source of the proposed investment,” they said in an emailed response. “We also note that the company’s plan to finance the tunnel by going public would mean the involvement of a Chinese state-owned enterprise.”

The Ministry of Finance, which has to approve the tunnel, said it had “no additional information” about the project. Estonian Minister of Public Administration Jaak Aab said last year he would recommend the plan be rejected for “environmental, economic and security reasons”.

The tunnel is just the tip of the iceberg. Rumblings of discontent with China have led to the Baltic nations vocally considering their positions in the 17+1 initiative established by China with Central and Eastern European countries in 2012.

“The format is an economic initiative, which, in our opinion, has not brought [our] expected results after almost 10 years,” Lithuania’s vice-minister for foreign affairs Edigijus Meilunas told the Post .

“Just take Lithuanian-Chinese trade data: despite our attempts to have mutually beneficial economic cooperation, the numbers still show huge imbalances. China is No 20 on the list of Lithuania’s trade partners.” 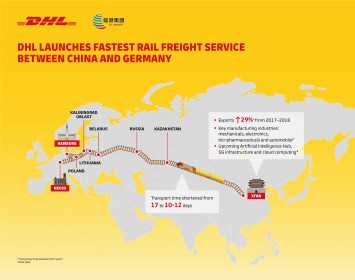 Lithuania recently blocked a state-owned Chinese firm, Nuctech, from supplying equipment for three international airports over national security concerns. Meilunas said these concerns were real, and encouraged China to engage with Baltic nations on a “27+1” basis at EU level.

A senior official in the Latvian foreign ministry echoed these claims, saying that while they thought fears of China trying to “divide and conquer” the EU through the 17+1 initiative were overblown, they would prefer not to continue engaging in this way.

“When we joined eight years ago, our primary wish was to see more economic interaction with China. However, the initial expectations have not really materialised,” said the official, speaking on condition of anonymity.

At the heart of the three nations’ suspicions are deep-lying allegiances to the United States as the “guarantor of statehood” in the face of Russian belligerence and the rise of China, said Berzina-Cerenkova in Riga.

“We definitely want to have more cooperation with the US, which is always our strategic ally in Nato and in general, with whom we as a new country share fundamental values,” they said.

Berzina-Cerenkova also highlighted Beijing’s perceived failure to consider the nuances of the 17+1’s individual countries. In the early days of the 16+1 – before Greece joined – Chinese documents and speeches “played up the socialist links” between Eastern Europe and China.

“There were even some articles written by the Chinese Academy of Social Sciences on how socialist friends are launching this new economic cooperation – which is mistake No 1, because socialism was not necessarily a home-grown thing, it was something that was imposed here,” she said.

Episodes emphasising differing directions of travel are cropping up with increasing regularity.

In March, the Chinese government berated Lithuania for plans to open a trade office in Taipei, urging it to “refuse to be taken advantage of by ‘Taiwan independence’ separatist forces”. In February, Estonian intelligence services warned that China’s “foreign policy doctrine” would lead to “a silenced world dominated by Beijing”.

“Faced with growing confrontation with the West, China’s main goal is to create a division between the United States and Europe,” read a hard-hitting report.

Vesterbacka is exhausted by the political situation, but describes himself as an “eternal optimist”. His project, he says, is about bringing people together, rather than stirring animosity.

“Maybe I am naive, but I think if you trade and you work together, it is not the norm to go to war,” he said. “I believe it’s a lot better to engage in dialogue than to isolate and ignore each other.”