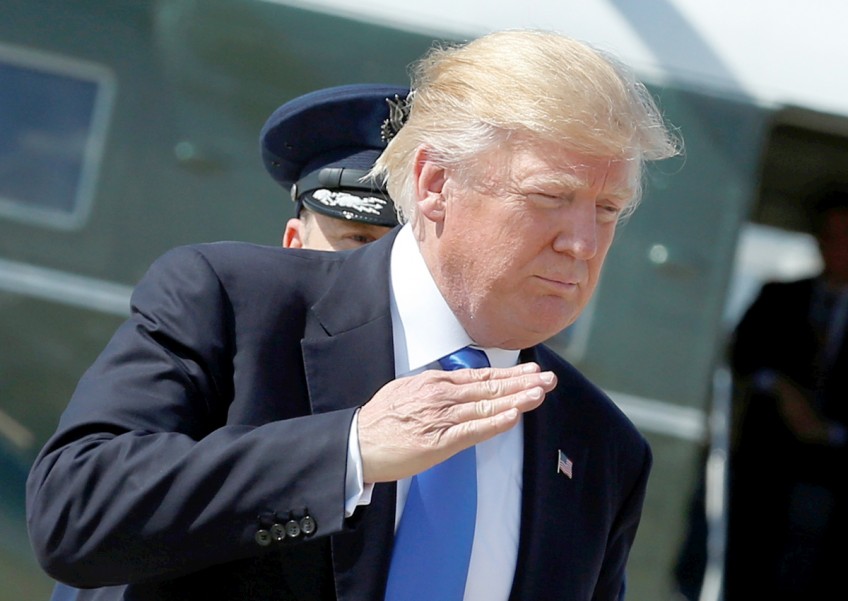 U.S. President Donald Trump salutes as he boards Air Force One at Joint Base Andrews outside Washington, U.S., before traveling to Bedminister, New Jersey for the weekend, June 9, 2017.
Reuters

WASHINGTON - President Donald Trump responded angrily to reports that he is under criminal investigation Thursday, deriding a "witch hunt" against him led by some "very bad" people.

He was answering accounts that he is personally being investigated for obstruction of justice with a characteristic scorched-earth defence: claiming mistreatment of historic proportions and calling into question the probity of his accusers.

"You are witnessing the single greatest WITCH HUNT in American political history - led by some very bad and conflicted people!" he said in an early morning tweet.

Trump did not directly address the allegations that he is being probed for possibly obstructing justice - a potentially impeachable offence. Nor did he deny that he has entered the miniscule ranks of sitting presidents who have become subjects of criminal investigations.

"They made up a phony collusion with the Russians story, found zero proof, so now they go for obstruction of justice on the phony story. Nice," he wrote.

Trump's young presidency has been battered by allegations - under investigation both by Congress and the FBI - that Russia interfered to sway the 2016 election in his favour, in possible collusion with Trump's campaign team.

The FBI probe, now in the hands of special counsel Robert Mueller, shifted its focus to allegations of obstruction in the days after Trump fired the agency's then-director James Comey on May 9.

The new allegations against Trump centre on his own admission that he fired Comey because of the Russia investigation, and suggestions he asked several top intelligence officials for their help altering the inquiry's direction.

The Washington Post reported Thursday evening that Mueller's team is also focusing on the finances and business dealings of Jared Kushner, Trump's senior adviser and son-in-law.

The widened Russia probe could have far-reaching repercussions for Trump's presidency, transforming his closest aides into witnesses and sucking yet more political oxygen out of the West Wing.

An aide to Vice President Mike Pence revealed on Thursday that he was hiring Richard Cullen - a veteran of the Iran-Contra investigation, Watergate and the 2000 vote recount in Florida - as a private lawyer.

The latest White House crisis struck on the evening of Trump's 71st birthday, after a day in which he had won plaudits for his handling of the shooting of Republican Congressman Steve Scalise.

In an address to the country, Trump struck a notably less partisan tone in response to his first major domestic crisis.

Ditching derogatory rhetoric about the Washington "swamp," he rallied in support of his fellow politicians and called on the country to pull together.

"We may have our differences, but we do well, in times like these, to remember that everyone who serves in our nation's capital is here because, above all, they love our country," Trump said.

But his tweets virtually ensure that the political focus swings back to the Russia scandal.

The president has long vehemently denied any collusion with Moscow.

But as the legal rope has tightened, his allies have gone on the offensive, questioning the credibility of the special investigator Mueller, a respected former FBI director who served under Republican president George W. Bush.

Allies have even floated the idea that Mueller may be fired.

On Wednesday, Trump's lawyer Marc Kasowitz suggested - without providing evidence - that the FBI had leaked details of the criminal probe.

"The FBI leak of information regarding the President is outrageous, inexcusable and illegal," Kasowitz said via a spokesman.

Late on Thursday, Deputy Attorney General Rod Rosenstein - who is overseeing the Russia investigation - issued a statement saying the Justice Department does not confirm or deny the kind of allegations in news reports about the probe, and encouraging the public to be sceptical of them.

"Americans should exercise caution before accepting as true any stories attributed to anonymous 'officials,' particularly when they do not identify the country - let alone the branch or agency of government - with which the alleged sources supposedly are affiliated," he said.

"Why is that Hillary Clintons family and Dems dealings with Russia are not looked at, but my non-dealings are?" he wrote.

"Crooked H destroyed phones w/ hammer, 'bleached' emails, & had husband meet w/AG days before she was cleared- & they talk about obstruction?" Several top intelligence officials have agreed to be interviewed by Mueller's team, according to reports in both The Washington Post and New York Times.

The Post quoted five people briefed on the requests, saying those who agreed to be interviewed include national intelligence director Daniel Coats, Admiral Mike Rogers who heads the NSA, and his recently departed deputy, Richard Ledgett.

Comey told Congress last week that before being sacked, Trump pressured him to drop an investigation into his former national security advisor, Mike Flynn, who was forced to quit for lying about his links to Moscow.