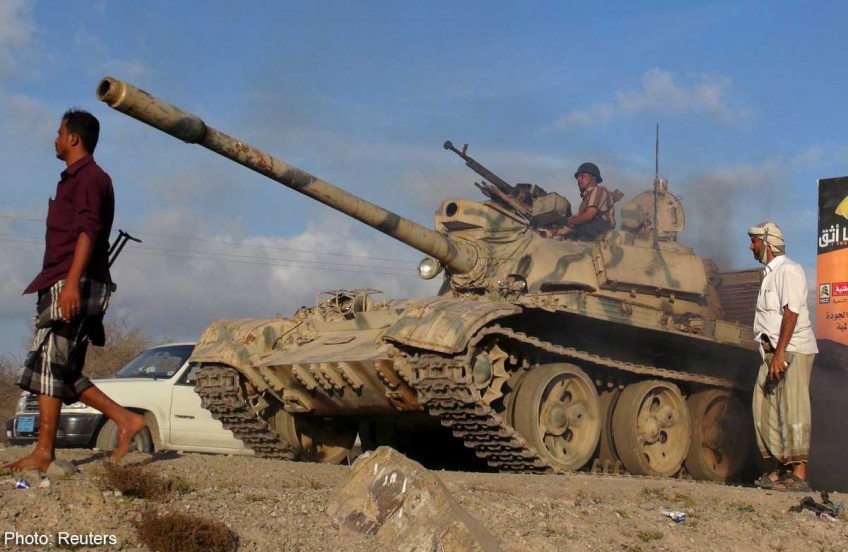 In another southern city, Taez, the militia shot dead five demonstrators as protests intensified against the Huthi presence, in what Amnesty International denounced as a "shocking disregard for human life".

The militiamen have seized large parts of Yemen and, in recent days, have been moving towards Aden, where Hadi fled after escaping house arrest in the capital Sanaa last month.

Yemen, a longtime US ally in the war on Al-Qaeda, is increasingly divided between a north controlled by the Huthis, allegedly backed by Iran, and a south dominated by Hadi supporters.

On Tuesday he called for the UN to go further and painted a dark picture of the crisis, raising concerns that Al-Qaeda will "seize the current instability to spark further chaos".

He also referred in a letter to the Security Council to an unspecified "missile capability looted from the legitimate authority", and asked the body to take control of the missiles.

The president called for the council to pass a binding resolution asking countries to provide immediate support "by all means and measures to protect Yemen and deter the Huthi aggression expected to occur at any hour from now" in several strategic cities, including Aden.

Diplomats on the council said no new meeting has been planned at this time.

Tuesday's clashes came after the Huthis seized the airport and a nearby military base Sunday in Taez, 180 kilometres (110 miles) north of Aden and seen as a strategic entry point to Hadi's southern refuge.

The Huthis have been increasingly joined in the fight by troops loyal to Saleh, who resigned in 2012 following nationwide protests but has been accused of allying with the Shiite militia as he seeks to regain influence.

Military sources in south Yemen said reinforcements from the army's Al-Hamza Brigade -- still loyal to Saleh -- had been sent to the town of Qatabah, some 120 kilometres (75 miles) north of Aden.

Dozens of tanks belonging to the 133rd Brigade, also loyal to Saleh, were sent to Qatabah, military sources and witnesses said.

These troops clashed with Hadi supporters in the surrounding province and took control of the headquarters of the local government in the provincial capital Daleh, military and security sources said.

Clashes also erupted in the province of Lahj, just north of Aden, where forces loyal to Hadi had deployed in anticipation of an attack.

Kirsh, on the border between Lahj and Taez provinces, fell Tuesday, as did two further loyalist positions 15 kilometres down the road towards Aden, tribal sources said.

Meanwhile, loyalists from a base at Al-Anad, in Lahj, were grouping in Aqqane, not far from Kirsh, in a bid to halt any further advance.

In his letter, Hadi said he had asked Gulf Cooperation Council members and other countries that belong to the Arab League to provide "immediate" support, including military intervention. His foreign minister said earlier that Hadi had also asked for a no-fly zone to be imposed on airports seized by the Huthis.

The Huthis, who hail from Yemen's mountainous north, have not been welcomed by the mainly Sunni residents in other parts of the country and have cracked down on protests.

Five people were killed and about 80 wounded when the Huthis opened fire Tuesday as demonstrators gathered for the third consecutive day to protest against the militia's arrival in Taez, a local official and medics said.

They also shot dead three others among a crowd that protested at a Huthi base in nearby Al-Torba, a local official said.

Amnesty's Said Boumedouha said "human rights in Yemen are in free-fall as even peaceful protest becomes a life-threatening activity."

The turmoil has raised fears that extremists will exploit the security vacuum in a country already home to what Washington considers Al-Qaeda's deadliest offshoot.