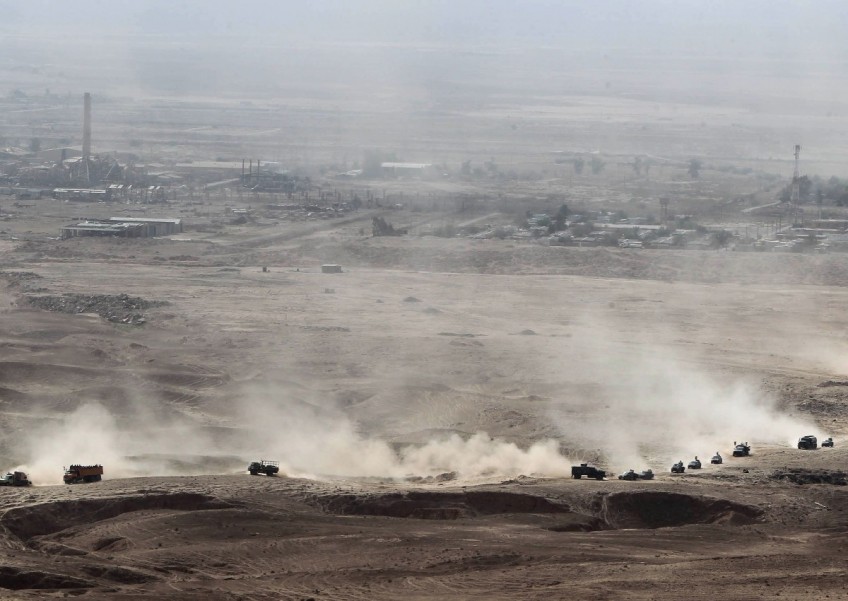 Vehicles of the Iraqi security forces and Shiite fighters from the Popular Mobilisation units drive in the Makhoul mountains, north of Baiji, during a military operation against Islamic State (IS) group jihadists on October 17, 2015.
AFP

"There were at least 36 explosions overnight in Raqa city, some caused by air strikes and some by weapons and explosives detonating after being hit," said Rami Abdel Rahman, director of the Syrian Observatory for Human Rights.

"The blasts shook the entire city. There were strikes on both the north and south of Raqa," he told AFP.

Abdel Rahman said the strikes were believed to have been carried out by French aircraft.

Among the targets hit was Brigade 17, a military encampment including weapons stores and a training facility.

The Britain-based monitor could not immediately confirm any casualties in the strikes, which come after IS claimed responsibility for attacks that killed at least 129 people in Paris.

"IS has imposed a security alert on the city, and it is difficult to confirm information about casualties from hospitals there," Abdel Rahman said.

Raqa city is the de facto Syrian capital of the Islamic State group's self-declared "caliphate," territory it controls in Syria and neighbouring Iraq.

It imposes its harsh interpretation of Islam on the territory, and Raqa is often the scene of gruesome execution-style killings carried out by the group.

The city has been the regular target of air strikes carried out by the US-led coalition fighting IS, but also Syrian and Russian raids.

It was the first provincial capital to fall from government control after a coalition of rebels seized it in March 2013.

IS subsequently captured the city from other opposition forces, ousting them as establishing it as its key Syria base.