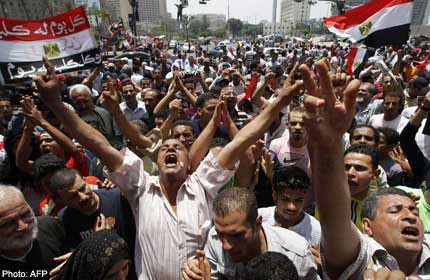 Protesters in Egypt shouting slogans against the Egyptian military council. Though the Middle East is grappling with serious political, economic and social problems facing at present, with conflicts spawned by the military coup in Egypt and disintegration of Syria, there is no reason why it should not recover from its current predicament. Throughout the region people now expect better governance, and demand to be consulted so least in this respect, the clock cannot be turned back to the authoritarian regimes of the past.

EUROPE - Can it get any worse? The military coup in Egypt, the Arab world's most populous country, threatens to bring down with it the entire political transition launched in the wake of the 2011 revolts across the Middle East. Meanwhile, Syria is disintegrating as rivals Saudi Arabia and Iran rush to settle their strategic scores.

That's certainly not how the Middle East was predicted to be when the so-called Arab Spring first captivated the world. Still, it may be too early to conclude that the region is destined to lapse into a new dark age of violence and economic decay. For it is downright insulting to argue that Arab nations are incapable of emerging from their current predicament.

All observers agree that the political, economic and social problems facing the Middle East are huge. Since the region emerged as a collection of newly independent states soon after the end of World War II, every political ideology has been tried there, only to be discredited.

Communism attracted a few intellectuals, but its anti-religious message was rejected as too alien by pious Muslims. Socialism became a set of slogans without much meaning. And democracy, with its complicated procedures of electioneering and endless quarrels between parties, seemed too vulgar to Arabs, especially as it was practised in the West, where the emphasis was more on personal liberty than on equality. It is not surprising, therefore, that the only ideological framework which retained its appeal is Islam, and that Islamic-based parties are invariably the first beneficiaries from any political upheaval.

The discrediting of all political ideas also went hand in hand with the failure of all economic models. State-guided management proved a disaster: repeated efforts to diversify national economies away from raw materials and subsistence farming came to nothing. But capitalism, introduced during the 1980s, resulted only in the rise of a narrow stratum of millionaires who parked their ill-gotten cash overseas.

Meanwhile, high birth rates and relentless migration from the countryside to towns created an explosive mix of young people, both poor and aspirational, aware of their terrible condition but unable to change it. The region has the highest level of youth unemployment in the world; female labour participation (at 25 per cent) is also the world's worst.

Seen from this perspective, the surprise is not that the wave of revolution duly came but that it has taken so long before it swept through the region. The real question should not be about what went wrong, but what could have gone right in the region over the past three years, given such a grim legacy.

To make matters worse, what the Middle East experienced over the past few years was not a true political transition, but merely the decapitation of previous regimes, the removal of top leaders without changing governance structures. Tunisian president Zine el Abidine Ben Ali was forced to flee when he was deserted by the police, his mainstay. Egyptian president Hosni Mubarak had to go when his country's generals dumped him. In both cases, the world was treated to exhilarating images of crowds storming palaces. But what looked like a historic, French-style revolution was, in effect, a political elite merely rearranging its ranks.

Once the lid of authoritarianism was lifted, political struggles developed not over social or economic programmes but over ethnic identity and the role of religion. This was not a battle that was either fair or enlightening, but a power grab in which Islamic-based parties always held the upper hand. They had spent decades preparing for such a moment, and had the necessary organisation to grab power.

What they did not have, however, is any knowledge of how to run economies or, more basically, what to do when power fell into their lap. It is noticeable that the post-revolutionary governments of Tunisia, Libya and Egypt all continued to behave as though they were still in opposition, fighting the battles of the past rather than preparing for those of the future.

They also had no understanding of how to harness others to help them govern. Egyptian president Mohamed Mursi could have retained his huge popularity had he offered political opponents places in the government. Quite apart from disarming the opposition, that would have spread responsibility for the unpopular economic measures that needed to be taken. Instead, he alienated everyone, postponed every economic decision and assumed all the responsibility for what followed.

In the short span of a year, president Mursi and his Muslim Brotherhood transformed themselves into a "ballotocracy": They believed and acted as though they were entitled to do as they pleased just because they won one ballot. They never realised that elections are not a guarantee of effective government but merely a prelude to one. And that ballots merely select those who take decisions, rather than give rulers blank cheques.

Western governments did not help matters either. They rushed to embrace new Arab leaders just because they were new. They did not raise the alarm when those leaders rammed through Constitutions without a shred of consultation, or proceeded to rule without Parliaments, as was the case with president Mursi's government. When Eastern Europe underwent a similarly difficult process of transformation at the end of the Cold War two decades ago, Western advisers were there, providing daily guidance on any piece of legislation or regulation, as well as plenty of financial credits and trade opportunities. None of this was available in the Middle East. International Monetary Fund analysis suggests that all countries undergoing political upheavals experience significant short- term falls in output for, on average, two years beyond the event and increased unemployment which starts to recover only after four to five years.

Still, what happened in Egypt was on an altogether different scale. The country's currency reserves halved, unemployment rates doubled and the share of the Egyptian population living under the international poverty threshold shot up to 55 per cent from 40 per cent. No wonder the military coup which removed president Mursi was hailed by so many ordinary Egyptians.

History is full of examples where an initially popular military intervention ends up producing a hated government. And matters in Egypt could get far worse: into the breach could step radical Salafists whose narrative was ignored two years ago by the massed youth, but who may now get their chance. If the Muslim Brotherhood ever returns to power, it may well conclude that the only way to remain in control is to copy the example of the mullahs in Iran, who after their revolution immediately dismantled the old military and created two parallel structures permanently competing with each other in order to preclude any coups.

But there are grounds for a more optimistic view of the Middle East. What has happened in Egypt is that political Islam - or the use of the faith for political purposes - has revealed its limitations. Islam can provide a guidance to a way of life and a system of values. But it cannot be the "answer to everything" as Egypt's Muslim Brotherhood claims, and certainly not for leaders who are not even aware of what the question is.

This does not necessarily mean that political Islam is now redundant. Rather, it merely indicates that Islamic leaders cannot derive their legitimacy from the Quran alone; they also have to deliver economic prosperity.

Turkey has shown the way in this regard: Its government has been in power for more than a decade and has put to rest Turkey's own history of military coups because it doubled the country's national wealth.

Although it seems like the Middle East is relapsing into its old authoritarian traits, the wave of revolutions has created an irreversible trend: throughout the region people now expect better governance, and demand to be consulted. At least in this respect, the clock cannot be turned back.

Professor Rami Khouri from the American University of Beirut in Lebanon speaks for many Arabs when he chides the West for its simplistic views of the current situation. "Some assume that Arabs and their political cultures can only be in black or white - democracy or military rule, and nothing in between, and others assume that the future of 350 million Arabs will be definitively set for decades by developments this week, or the next month," he complains.

What everyone forgets, Prof Khouri adds, is "the force of human agency and the powerful corrective measures that come with time".

In short, don't give up on the Middle East.