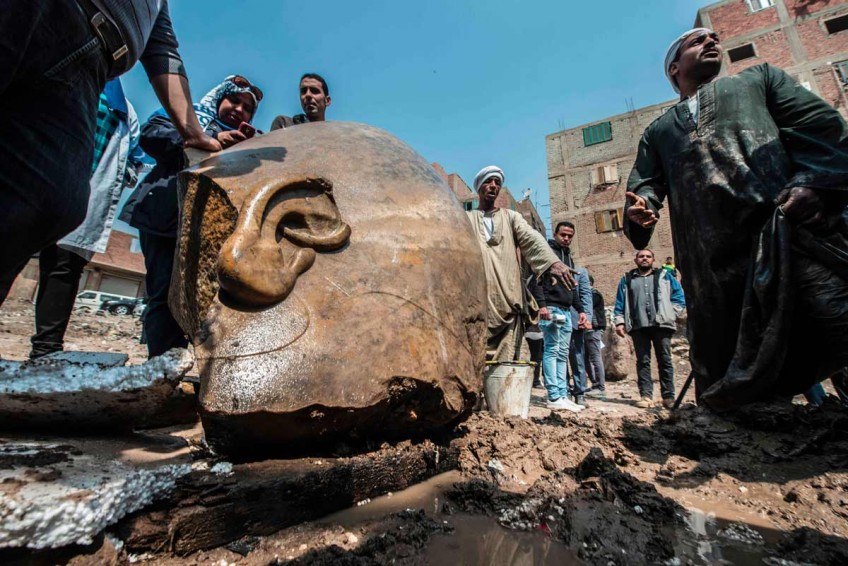 Egyptian workers look at the site of a new discovery by a team of German-Egyptian archeologists in Cairo's Mattarya district on March 9, 2017.
AFP

Archaeologists have uncovered two pharaonic statues dating back more than 3,000 years in a muddy pit in a Cairo suburb on Thursday (March 9).

The relics were found in Mattarya district, site of the ancient Pharaonic capital of Heliopolis and today a sprawl of working and middle class districts in northeastern Cairo.

The statues, discovered on wasteland between crumbling apartment blocks, are thought to represent Pharaohs from the 19th dynasty, which ruled from 1314 to 1200 BC.

One statue stands eight meters tall and is carved out of quartzite, a tough stone composed mostly of quartz grains.

It could not be identified from its engravings but it was found at the entrance to the temple of King Ramses II - also known as Ramses the Great - suggesting it represents him.

The other relic is a limestone statue of 12th century BC ruler King Seti II.

They were discovered by a joint German-Egyptian archaeological mission."The discovery of the two statues shows the importance of the city of Heliopolis, which was dedicated to the worship of Ra," the sun god, said Aymen Ashmawy, head of the Egyptian team on the dig.

He said the discovery was "very important" because it indicated the Oun Sun temple was a "magnificent structure".

Dietrich Raue, head of the German team, said the archaeologists were working hard to lift the statues so they can be transported to another site for restoration.