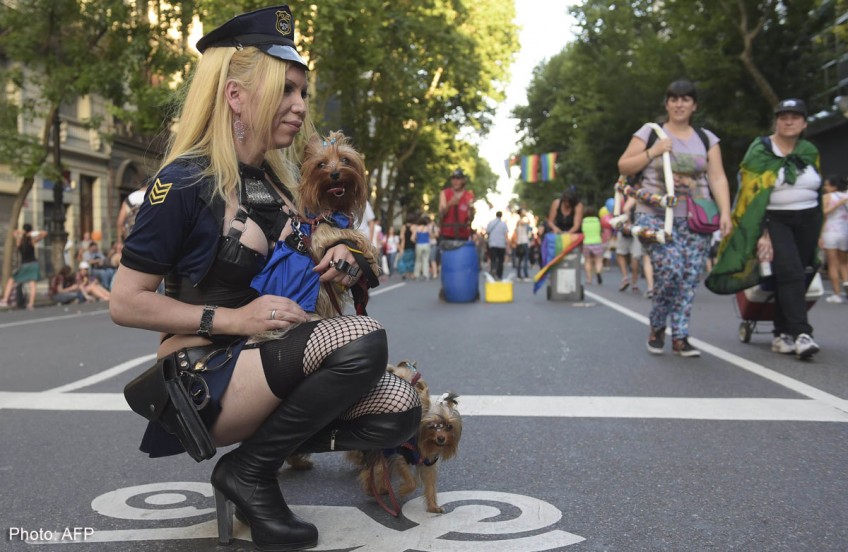 A tranvestite poses with dogs during the XXIII Gay Pride Parade in Buenos Aires on November 15, 2014.

BUENOS AIRES - Argentine President Cristina Fernandez chose an unexpected theme for her year-end message to the country: a change in policy at the state-run airline to allow passengers to carry their already notoriously-pampered lapdogs with them on flights.

Punctuated by photographs on her Facebook page of the two-term leader sitting on presidential plane Tango 01 with her Toy Poodle Lolita, Fernandez said the perk will be shared by travelers on Aerolineas Argentinas, the country's main carrier, starting in mid January.

"Careful! I said only small pets," the post says. "Don't try to board with a 50 kilo mastiff. Lolita only weighs two kilos."

Hand-held pooches ranging from Shih Tzu's to Pugs are a common sight at outdoor cafes and on the wide avenues of Buenos Aires, which is known as the Paris of South America for its European layout and architecture.

Lapdogs are a status symbol in Argentina, dressed sometimes in fitted sweaters emblazoned with colors of their owners' favourite football club. Fernandez's dog post got more than 36,000 'likes'.

What Argentines are less keen on, and what got no mention in Fernandez's message, was the country's double-digit inflation and contracting gross domestic product.

Her successor will inherit a pet-friendly airline policy but an economy left in deep trouble by repeated sovereign debt defaults and heavy-handed trade and currency controls.

As an afterthought, Fernandez said central bank cash reserves rose 2.7 per cent in 2014, which could keep her from being forced into an unpalatable deal with hedge funds suing over defaulted bonds.

The next president will be elected in October, so Lolita better make the most of the time she has left to enjoy the spacious Tango 01. Fernandez is constitutionally barred from seeking a third consecutive term.