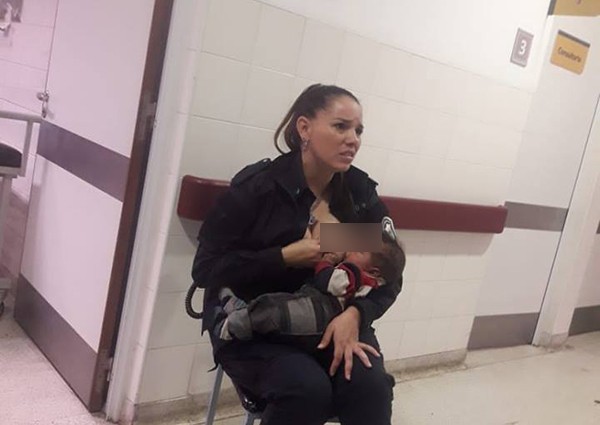 A policewoman received widespread praise after she was photographed breastfeeding a crying, “dirty and smelly” baby, who was rushed to a hospital in Buenos Aires, Argentina.

Marcos Heredia, a colleague of the policewoman who was identified as Celeste Ayala, shared a photo of her breastfeeding the infant via Facebook last Wednesday, Aug 15. He said that he wanted the public to know about the love Ayala had shown for the baby on Tuesday, Aug 14. Ayala didn’t hesitate to help the baby despite the hospital staff reportedly referring to the child as “dirty and smelly.”

The local fire station where Ayala volunteers also took to Facebook to praise the policewoman. The Facebook page of the fire station noted that what Ayala did fills them with pride and motivates them to redouble the efforts, work and solidarity in their community.

Apparently, Ayala was the guard on duty when the baby boy was taken to Sister Maria Ludovica Children’s Hospital. In an interview with Crónica last Thursday, Aug. 16, she said that the baby was the youngest of the six malnourished children brought into the hospital.

She recalled how she asked the caretaker if she can breastfeed the then-crying baby, seeing as she breastfeeds her one-year-and-four-months old daughter. She stated that while she was breastfeeding the baby who ceased crying, she felt as if he was hers. The baby, after having his fill, went to a peaceful slumber.

The policewoman said that given an opportunity, she would adopt the baby, seeing as her husband loves children.

Netizens were quick to praise Ayala, commending her for her motherly act of generosity. Meanwhile, one netizen, Luvy Rome Mia Ro, pointed out how problematic the hospital’s system was.

The netizen said that while what Ayala did was a nice gesture, it didn’t make up for the fact that the hospital failed to address how it responds to situations where children were taken from their mothers.

“Re nice gesture but the hospital/the state leaves a lot of cases like that of babies children in total abandonment,” the netizen commented. “When these things are uncovered, we as citizens have to think about why [babies] have so many needs, [while] there are so many officials who are in charge of defending the rights of children and health.”