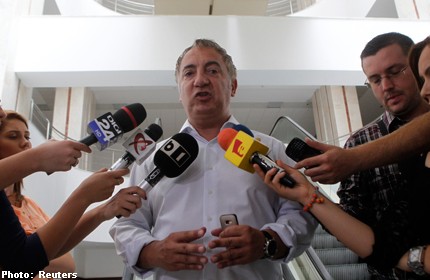 Catalin Dancu, lawyer of Olga Dogaru and her son Radu

BUCHAREST - The main suspect in a spectacular heist from a Dutch museum has told prosecutors he would return five of the seven paintings if they agreed to try him in the Netherlands, his lawyer said on Tuesday before the start of his client's trial in Bucharest.

"He said: 'Send me back to the Netherlands and I will give you five of the paintings'," Dancu added.

There was no mention of the other two missing paintings, and the lawyer said he could not confirm whether Dogaru was actually in possession of any of the masterworks.

Romanian prosecutors fear the seven pieces stolen in October from the Kunsthal Museum in Rotterdam may have been burnt by Dogaru's mother.

An analysis by experts from Romania's National History Museum revealed that ashes retrieved from her stove included the remains of three oil paintings and nails from frames used before the end of the 19th century.

The trial of six Romanians, including Dogaru and his mother, into one of the biggest art heists in Dutch history opened on Tuesday morning with four of the accused present in court.