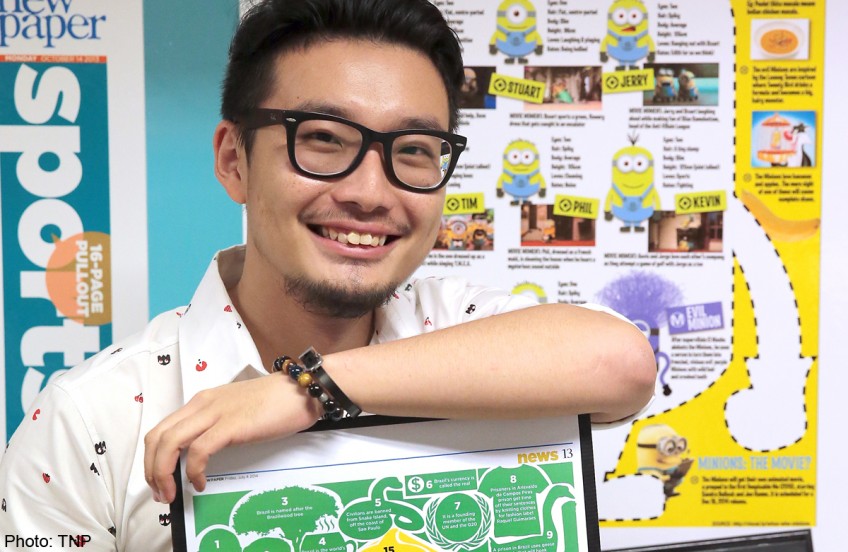 CREATIVE: Mr Billy Ker's infographic almost did not make it to print until an editor spotted it on a colleague's desk.

This young infographics journalist from The New Paper has done it again.

Mr Billy Ker, 27, has won another Award of Excellence for Feature Design Pages in a worldwide contest.

His Olá Brasil! infographic for the World Cup won him a rare double honour in the 36th edition of the Best of News Design Competition run annually by the Society for News Design (SND). It is the equivalent of the Oscars in the news media business worldwide.

Mr Ker won the same award last year with an infographic on the adorable yellow Minions from the animation film, Despicable Me 2.

Yet the source of his inspiration this time was grounded in reality, close to home - a Brazilian flag that was flying in The New Paper newsroom before the World Cup hosted by the South American nation last year.

"The colours are very striking," he said. "I like the flag a lot."

The flag, along with trending Buzzfeed videos featuring top-ten lists of people, events or facts, formed the basis of his self-generated infographic, done outside of usual work assignments.

But this award-winning feature almost did not make it to print. Mr Ker missed the internal deadline for World Cup pieces to be submitted, and eventually finished it a few days after the tournament started on June 12.

"I continued even though it seemed pointless, because I thought it was good," he said.

He spent hours researching the country in order to narrow down the most intriguing facts, staying two to three hours past working hours each day for about a week to complete it.

The artwork was shelved amid the World Cup frenzy, until an eagle-eyed editor spotted it on his colleague's desk and it was finally published on July 4.

This was already in the second last week of the tournament, but the editor thought it was too good not to print.

The artwork also won an in-house award last July for Best Layout/Page Design, and is in the running for an annual award this year in the same category.

TNP creative editor Ken Jalleh Jr said that the graphic was captivating because it combined visual elements and text to great effect. "Our mantra is: Don't just decorate, communicate," he said.

Mr Ker's infographic certainly does both, with each image a visual representation of the fun fact it contains.

Despite such a feat, he remains humble, acknowledging the help he received from the sub-editing team in making final edits.

'Think' to help you sell

The team which has consistently won world recognition for its ability to show and tell with brilliance has broadened its scope to help you sell.

The New Paper's Creative Department is now offering its award-winning expertise in infographics, illustration and interpretative journalism on a commercial basis.

Earlier this year, TNP set up Think, an initiative to meet increasing demand to communicate complex messages and policies simply and visually.

Said Think chief Ken Jalleh Jr, who is also TNP's creative editor: "It's expertise that's been honed over 26 years of appealing to a busy, easily distracted audience more inclined to visuals than a mass of grey text."

More so, he added, with today's generation of young readers who are constantly bombarded with information.

"They want information that's easy to understand and presented visually, whether through infographics, animation or illustrations.

"Our research has shown that it's a challenge that few creative agencies would want to undertake.

"And that's what Think offers to clients. We are not a creative agency; we are creative journalists."

Among the international awards the team has won are those from The Society of News Design, the World Association of Newspapers and News Publishers, and the Society of Publishers in Asia.

Think's aim, as it states on its website - thinktnp.com - is to show and tell well, with intelligence and brilliance.

It aims to make clients' messages clear, concise and compelling.