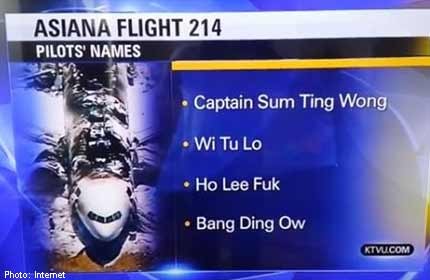 SEOUL - Asiana Airlines said on Wednesday it has scrapped a plan to sue a US television station that incorrectly reported in a racially offensive manner the names of pilots of the flight that crash-landed in San Francisco this month.

"Asiana Airlines has decided not to proceed with the case since KTVU has issued a formal apology and in order for us to focus all our efforts on managing the aftermath of the accident," the South Korean company said in a statement.

An anchorwoman at KTVU, a Fox affiliate based in Oakland, California, fell victim last week to an apparent prank and reported four bogus pilot names, including "Sum Ting Wong" and"Wi Tu Low," during a newscast.

The airline had said this week that it would sue the television station because the reporting defamed the pilots and the company.

The crash of the Boeing 777 plane resulted in the death of three Chinese teenage girls who were visiting the United States for a summer camp. More than 180 passengers and crew members were injured.