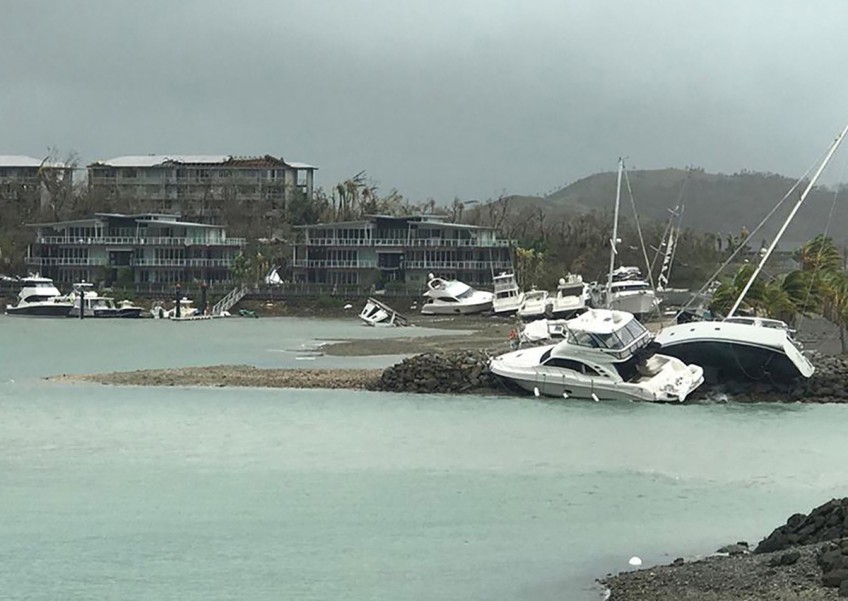 Boats washed up at the marina on Hamilton Island after the area was hit by Cyclone Debbie.
AFP

SYDNEY - Australia began evacuating thousands of people stranded on resort islands in the tropical northeast on Thursday, as water supplies began to run low two days after Cyclone Debbie tore through the region.

Tens of thousands more people were still without power on the mainland of Queensland state, where officials issued new evacuation warnings ahead of more heavy rainfall in the wake of the powerful cyclone.

The storm, now downgraded to a tropical low, tracked over Queensland's central interior before moving southeast and driving squalls towards the state capital, Brisbane, causing flash floods and prompting the government to close more than 2,000 schools.

"Nature flings its worst at Australians and it certainly has happened here in the Whitsunday region," Australian Prime Minister Malcolm Turnbull told reporters at windswept Bowen Airport, north of where the cyclone made landfall.

Resorts along the world-famous Great Barrier Reef and the Whitsunday coast bore the brunt of the storm with wind gusts stronger than 260 kph (160 mph).

Island holidaymakers were being brought back to the mainland by ferry, helicopter and plane. "It's kind of chaos down here," Jon Clements, an architect holidaying on Hamilton Island, told Reuters.

"I think there's probably three times the number of people they can put on aeroplanes at the moment down there." Authorities said water ran low on Daydream Island after the storm cut off mains supply and bottled supplies dwindled.

The naval ship HMAS Melville was due to arrive in the Whitsunday Islands later on Thursday with water, food supplies and equipment to begin repairing and rebuilding infrastructure, although the continued poor weather has slowed what is expected to be a lengthy clean-up operation.

Marine experts fear the Great Barrier Reef, already hit by coral bleaching, could have been damaged by churning seas whipped up by the cyclone. A full assessment is likely to be some days away.

In the Bowen Basin, the world's single largest source of coal used to make steel, BHP Billiton, Glencore , and Stanmore Coal all said work at mines there was halted until further notice.

Hundreds of hectares of sugarcane crops had been flattened and Wilmar said its sugar mills at Proserpine and Sarina had been shut.

One female tourist died on Monday in a car crash that police said was due to wild weather as Cyclone Debbie approached.

Another two people were injured as the storm passed through.